Today, I'm going to focus on Boorley Green, near Botley in Hampshire. Boorley Green is a small place, with a pub, some fields, some houses and not a lot else. It's been a rather confusing location for the local Hampshire bus companies to serve, and only served because of a Hampshire County Council tender. This post will focus on the recent history of bus services. Please note these are more rambles of what I remember, rather than facts set in stone. Having said that, regular readers will know vague rambles are quite a regular occurrence!

Back when BlueStar services were first introduced, Boorley Green was served by Solent Blue Line's route 6. Back in 2006(ish), BlueStar 3 was a circular route from Southampton, via Bitterne, to Hedge End and back, operated by minibuses at a frequency of every 20 minutes, I seem to remember. Route 6 was then an hourly addition to this, extended to Botley and Boorley Green. The route was operated by primarily a variety of ex-Wilts & Dorset stock - initially Metroriders in a variety of colours or former Southern Vectis Iveco Turbo-Dailys in blue - and then the first Solos transferred to Solent Blue Line in 2007. Thanks to Ant Poulton for the photo link - his website is well worth a look if you've got some time on your hands. 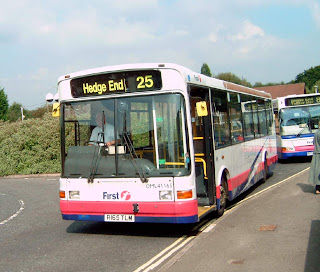 Following a BlueStar network review, First took over the Boorley Green contract in 2007 using former London and Berkshire Darts. Route 25 was a strange route that seemed more of a shuttle to get passengers to the trunk routes or railway station than anything else. It operated at about an hourly frequency (except an hourly lunch break) from Hedge End superstores, to Hedge End railway station, Botley and Boorley Green. There was also a peak service AM from Southampton to Boorley Green, and a return trip in the evenings. 41165 (R165TLM) was one of the regular buses on the route, and is pictured at Hedge End railway station back in August 2007. 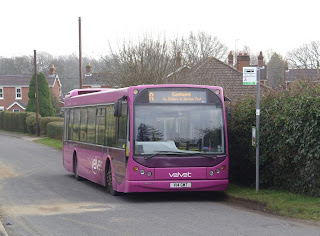 The 25 disappeared a few years later, and was replaced by an hourly Velvet route A. This connected Boorley Green with Eastleigh this time, via Botley and Hedge End. The connection to railway station at Hedge End was lost, but the bus did travel directly to both Southampton Airport Parkway and Eastleigh railway stations.  The route, at this point in time, was primarily operated by Velvet's DAFs, as illustrated here by V14GMT. This arrangement carried on until late last year, when Velvet reviewed route A and re-routed it into Southampton city centre. 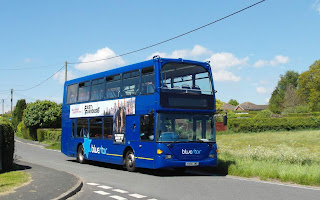 Full circle. Now Solent Blue Line are back on the route, and Boorley Green has never had it so good! The hourly frequency remains, but also now on Sundays. Boorley Green has lost the Eastleigh connection, but regained the direct Southampton link. BlueStar's hourly route 3 does the honours, and a variety of Citaros, Volvo B7TLs, or Omnidekkas, such as former Reading 1012 (YN06JWE) do the honours. 1012 is pictured at Boorley Green yesterday. Incidentally, BlueStar do the opposite loop to that of Velvet, which makes photography far easier for the sun. (I'm sure that isn't why they did reverse the loop, however!)

I suppose the most damning statistic of them all, is that in three or four photography trips to Boorley Green no passengers have been on the bus at any time. Presumably the weekday passenger flow is greater - especially to Hedge End village, the superstores and Southampton city centre itself. I also am aware that certain trips in the day are essential to convey school children to or from school. However, I wonder what the future of the Boorley Green route holds in these cost-cutting times...
Posted by bus80d at 11:19