Today, I managed to grab my first shots of buses along the Fareham - Gosport Bus Rapid Transit road. The busway sees brand new Volvo B7RLEs on the Eclipse services, along with Barbie livered Darts on the X88. 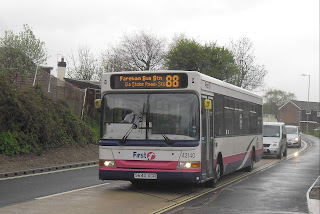 The 88 passes the Wych Lane entrance to the bus way. Route 88 connects Fareham to Gosport, via Hoeford, the outskirts of Bridgemary, Rowner and Stokes Bay. To enable a connection to the railway station, the 88 changes in to the X88 Monday-Friday peaks which sees conventional First buses use the bus way. Here is 42140 (S640XCR) on a conventional 88 crossing over the busway at Wych Lane. This bus, right up until last Saturday, was the regular type of bus on Fareham - Gosport services. 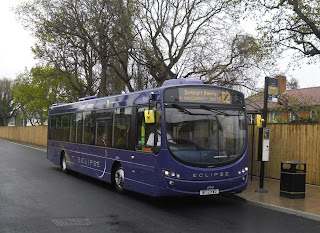 The Eclipse buses have proved challenging to photograph for me so far. My camera doesn't pick them up when they are moving (possibly due to the colour and as there hasn't been any sun recently!). Here is 69546 (BF12KWD) pausing at Gregson Avenue bus stop earlier today. 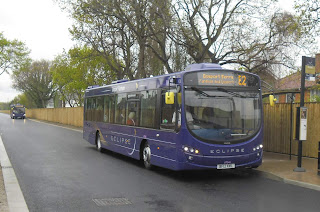 Here is another shot of two southbound workings on BRT - 69546 (BF12KWL) leads on an E2. Just after these buses, some pedestrians appeared walking down the bus way. A PCSO also, coincidentally, was riding up the bus way, and they were asked to leave. 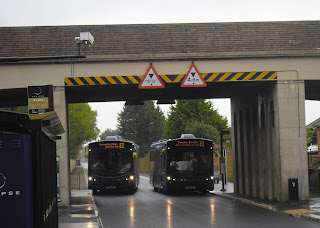 Some buses have been found to bunch on these services. However, with a bus every 7 to 8 minutes this problem isn't as bad as it could be on some other less frequent services. Here the E2, operated by 69548 overtakes the E1, operated by 69555. This is one of the low bridges along the bus way, but the signs clearly indicate that double deckers will be able to fit under the bridge. Further south bound, there is an arch bridge which requires high buses to veer into the centre of the bus way also.

First impressions - excellent, well presented buses inside and outside. The live information at stops or on the bus is excellent. The computer speak on the buses is a welcome addition when the buses are moving quickly, and there are few landmarks to mark out the stops. The early technical difficulties (Ferryham, Farrrhaham...) will be ironed out as the service develops. Loads looked good on all buses I saw. Here's to the success of the bus way, and the continued investment in public transport in Southern Hampshire.
Posted by bus80d at 17:07