I'm back! Or at least I'm going to try being back for a few weeks and see how long I can keep the posts up, with lots of new material and latest news happening at the moment. Since my last post there has been a whole host of route introductions, route cancellations, competition, new deliveries announced and new buses launched, so its going to be a bit of time before I cover everything.

I'm going to start with the rather sad cancellation of First's route 11 - the Watersider - in Southampton. The route was launched last Autumn with two Volvo B7RLEs, connecting Hythe with Applemore, Marchwood, Totton and Southampton. This was to fill a gap in the market, with BlueStar's route 8 expected to come off. Lo and behold, following First's route registration, BlueStar doubled the 8 and even introduced an hourly service on Sundays - a service the company tried to drop many years ago (I remember Velvet operating it in 2008). First's loads naturally didn't materialise, with supposedly the passengers for one service per hour now being split between three. 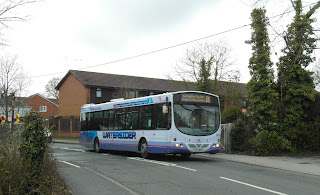 The Watersider in all of its glory- former Yorkshire Volvo B7RLE 69246 (YJ07WFN) pictured at the now-closed Marchwood railway station, heading for Southampton on the 11. I looked at the loads on BlueStar's 8s and First's 11s, and I'd be surprised if either service is making either company any money. As an aside, as I was waiting, I heard two youngsters complaining about Marchwood station. "What's the point of having a railway station without running any trains to it?" they complained. Fair point - it was closed c.47 years ago - money may be made along the Hythe branch now... 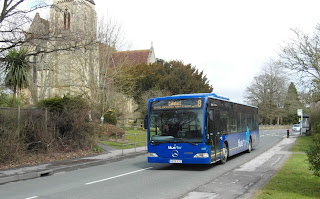 The competition - BlueStar's Citaros on route 8. This one is 2431 (HX06EYZ), and is pictured outside Marchwood church. Since First's cancellation, BlueStar have already put in a route variation on VOSA... we await with baited breath to see if the 30-minute frequency and Sunday service remain... 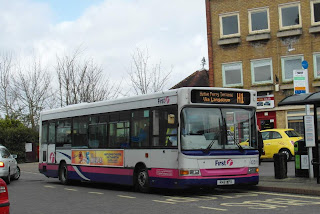 On contract to HCC, First won the Hythe town services at the same time as launching the 11 commercially. Here is Southampton Dart 42411 (R411WPX) pictured loading passengers in the town centre. 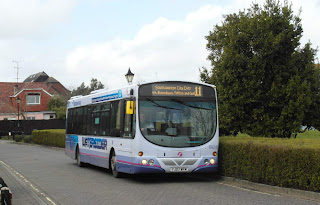 To finish off, the other branded Volvo B7RLE. This time sister 69245 (YJ07WFM), pictured heading along the delightfully named "Prospect Place" towards Hythe Ferry Yard. This bus came in with about 3 passengers on, and left with three or four more.

Having viewed the loadings today, I think First are making (unfortunately) the right decision. I also think BlueStar and First may had it right - one bus per hour. However, BlueStar are now stuck with two buses an hour or the certainty of a barrage of criticism if they reduce the frequency.