I've finally managed to capture some of the former First Devon & Cornwall Optare Solos in service in Hampshire! 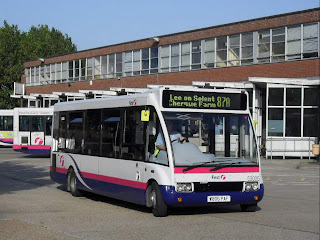 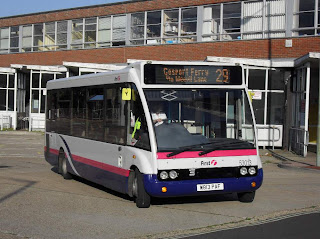 ﻿Another common route working for the Solos appears to be the Gosport circulars - route 29/30 connecting the town centre with Alverstoke and Haslar. These routes were previously operated by Mercedes-Benz 709Ds so it makes sense. Here is 53013 (W813PAF) pictured leaving Gosport bus station on the 29.
From the 24th October, these Solos will become the main type allocated of the extended route 26. Route 26 will extend from Hedge End superstores, to Hedge End village centre, Windhover Tesco, Lowford, Netley, Butlocks Heath and Hamble at a varied frequency of about every 2 hours. Route 26 will do a loop of Netley and Butlocks Heath before arriving in Hamble, and leave Hamble directly along Hamble Lane rather than do the loop again. Through tickets will be available.
Posted by bus80d at 18:57