On Saturday, I spent a few hours in the sun at Horsham where I was able to capture the brand new Enviro200 single deckers, which were introduced by Metrobus to improve the town services. 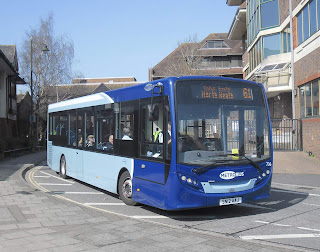 6 buses have been introduced at Crawley depot for use in Horsham. They look stunning, glinting in the sunlight as they buzzed quickly around the town. They are usually found on routes 61, 93 and 98 - or these were my observations yesterday. Here is 736 (SN12AAJ) heading out of the town centre on route 61. 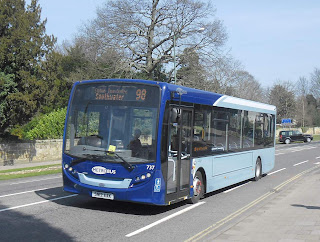 The livery is very similar to that of the new Plymouth Citybus livery - albeit the colours are different. The Best Impressions connection is clear, although I don't think there is a problem. If the livery works, which I think this one certainly does, then why not replicate the base design elsewhere. Here is 737 (SN12AAK) heading for Horsham town centre, having just served the railway station stops. 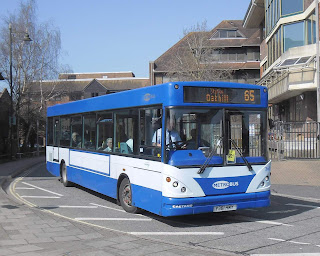 Dennis Dart SLFs are also found alongside the Enviro200s. Caetano bodied 361 (Y361HMY) is pictured heading out of the town centre for Oakhill. 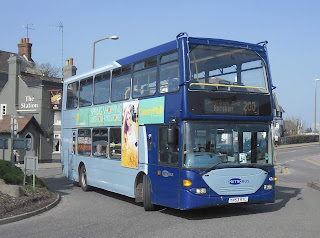 Horsham is served half hourly by route 200, connecting the town to Crawley and Gatwick Airport. The route allocation seemed to be a mixture of Darts and deckers - here is Scania Omnidekka 474 (YN53RYC) heading passed the railway station towards Horsham town centre. 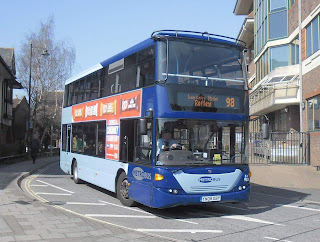 Metrobus have two Scania Omnicity double deckers in blue livery rather than red. I managed to catch up with one yesterday - here is 953 (YN08OBP) heading out of the town on route 98. 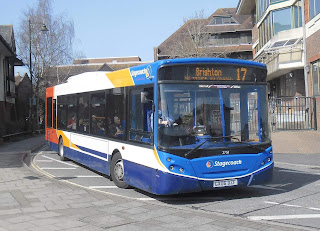 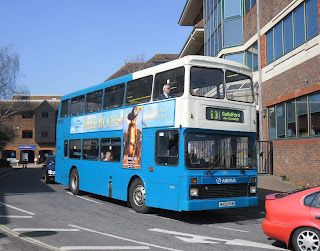 Finally for this blog, here is Arriva Guildford's sole Volvo Olympian that remains in the fleet. 5925 (M925PKN) heads out of Horsham town centre, back towards Guildford on the hourly 63.
I hope you have enjoyed these photos from an area of Southern England not usually featured on the blog.
Posted by bus80d at 11:00