Although I wouldn't class myself as a railway or train enthusiast, I love the railway. I have more of a nostaligic love for railways - the history of railway stations, the history of old and closed railway lines, different routes and different operators. I don't particularly know the classes of trains - a few mind, such as the Portsmouth-Cardiff 158s, for example - but I enjoy the variety, the noise and the atmosphere of railways. I also feel the train is the best way to see the countryside - anyone who has caught the Weymouth-Southampton line, or alongside the River Avon in the Avon Valley will see the appeal. This post documents some of my photos of buses alongside the railway...
﻿ 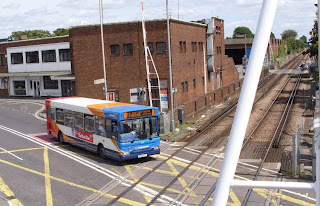 First up, here is Stagecoach South 34528 (GX04EYA) in Chichester, heading over the rail crossing next to the station. The photo was taken from the rail station bridge. 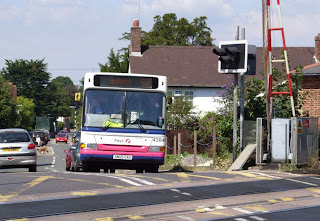 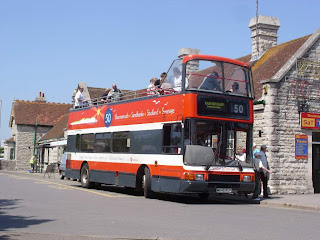 There is something special about Swanage railway station - it really does feel as if you are stepping back in time when you visit the town. Here is former Wilts & Dorset 3157 (M645RCP) standing outside Swanage rail station, which of course is preserved. I'd love for the line to be connected to Wareham one day with the preserved locos - I wonder if it will ever happen. 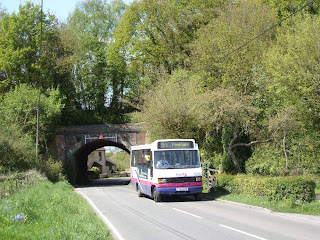 Something a little bit different here - here is First Hants & Dorset 51723 (P723KCR) pictured having just passed under one of the former Meon Valley Line bridges in Funtley, just north of Fareham. The line from Fareham to Eastleigh, and previously Alton, had a tunnel between Fareham and the former junction at Knowle, which suffered from subsidence. Hence, a 2mile loop was constructed to bypass the tunnel, and the bridge is on of its remnants. If you Google Maps the route, looking at the satellite image, you can still see the old loop marked out by trees. 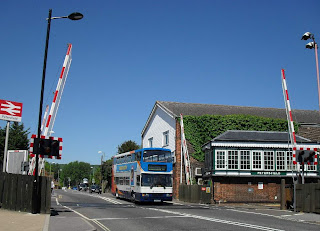 Finally for today, is Stagecoach Hampshire 16269 (P269VPN) arriving at Petersfield railway station on a 67 from Winchester. The 67 doesn't receive the ex-Coastliner Tridents, one of the Winchester country routes to retain Olympians, Darts and B10Ms. The fantastically preserved signal box at Petersfield can be seen on the right, and Petersfield station is on the left.
Posted by bus80d at 16:52