Go South Coast have received a number of Mercedes-Benz Citaro articulated buses from London Central, following their withdrawal in London. Although their specific use has not yet been identified, they have joined the coach fleet - now located at various places on the Isle of Wight. 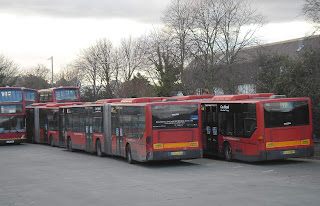 At least 4 are now located at Ryde depot - as is illustrated in this photo to the left. Fleet number 2903 (BX54UDG) is pictured on the left of the screen, with sister 2910 (BX54UDY) on the right. They have joined a rather large fleet of ex-Go Ahead London Volvo Olympians and Volvo B7TLs which can be found on the island. We expect these bendies to form the main capacity of several of the island's high profile events this year, such as the Isle of Wight festival, although nothing has been confirmed yet. 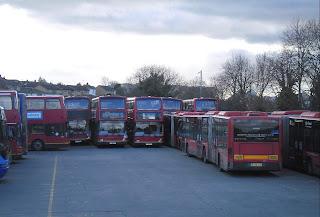 Go Ahead London's Isle of Wight outstation - in view are 1x Volvo Olympian, 4x Mercedes-Benz Citaro artics, and at least 10x Volvo B7TLs.
Just another note - all the Optare Tempos on the island have now moved on with most now in service from Wilts & Dorset's Poole depot. I aim to go to Poole over the next month and will post photos when I have them.
Posted by bus80d at 11:00