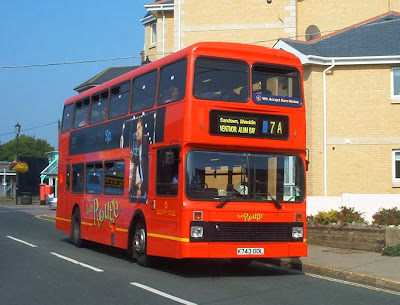 743 is one of only two Olympians native to Southern Vectis to still be in service with the company. It was one of two of the K-reg batch to receive Route Rouge livery - advertising the 2 and 3 from Sandown, Shanklin and Ventor to Newport and Cowes, via the centre of the island. It is pictured heading past Shanklin railway station. It could, this summer, still be found on open top routes on the island, but there was/is a rumour it was the last year for these grand buses on the route.
Posted by bus80d at 10:00