Due to other commitments, I haven't managed to get out and about with the camera recently (also weather conditions/sun levels have made photography very difficult). Therefore, once again, I'm going back in time... This time the date is 30th July 2003, and Solent Blue Line's Transbus Dart MPDs have just been introduced over the Eastleigh network... 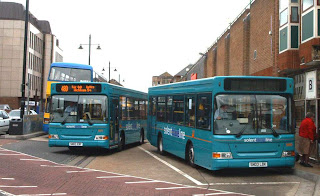 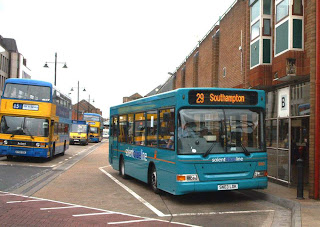 The first buses I managed to photograph on the visit were two of the brand new MPDs - here 571 (SN03EBP) passes 580 (SN03LDK) as it departs Eastleigh bus station heading for Wickham on route 48D. 571 is one of 6 still with BlueStar, whereas 580 is now at Wilts & Dorset having just moved on from Southern Vectis. It's also now numbered 320, where 571 is still 571. 580 is again shown underneath in the second photo.
Furthermore, neither of the routes these buses are operating exist with BlueStar anymore; the 48D is now a mixture of BlueStar's route F from Eastleigh to Swanmore, Brijan's route 8 from Eastleigh to Bishop's Waltham, and First's 94 from Wickham to Fareham. Route 29 has largely been withdrawn but Velvet still operate the Eastleigh - Hedge End stretch as route A, although as the A has been halved in frequency and nothing has replaced the Hedge End - Southampton stretch, you could say it has been completely cut. 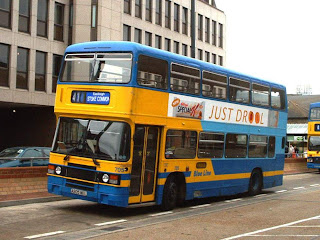 The Leyland Olympian was the most common double deck bus for many a year at Solent Blue Line, and I managed to photograph former Hampshire Bus 705 (A205MEL) on 30th July. She is seen in Eastleigh bus station waiting before service 41 commences. The 41 to Stoke Common is now BlueStar route F. 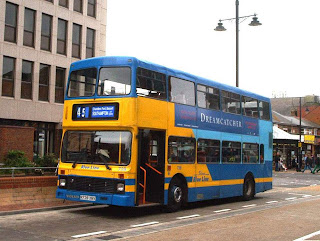 Solent Blue Line, at this point, operated 6 Volvo Olympians - none of which remain in service with the company today. 739 (R739XRV), pictured here, now operated on the Isle of Wight with Southern Vectis as an Island Breezer. I think the straight lines of this yellow and blue livery suited the Northern Counties bodywork. 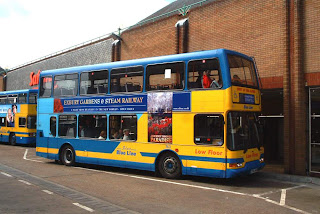 Whereas you will now find a low floor bus anywhere on the BlueStar network, low floor double deckers were at a premium back in 2003. 15 Volvo B7TLs and Dennis Tridents were scattered across route X9 and 38 from Southampton to Hythe, 26/7 Southampton - Hedge End & Fareham, 47 Southampton - Winchester and 48 Southampton - Eastleigh & Fair Oak. Here is 743 (T743JPO), pictured in Eastleigh bus station having just arrived on a 48 from Fair Oak - now route BlueStar 2 of course.

I hope you have enjoyed this trip down memory lane - comments as to whether these historical posts are valued would be much appreciated as I don't wish to bore you! Unfortunately I can't go further back in time as I only really started photographing buses in 2003. Thanks for viewing.
Posted by bus80d at 16:16