One of my aims for this year was to return to Bognor Regis, a place I haven't visited since 2005 and has undergone major changes to its bus services. Today I returned, and managed to get some good photos. 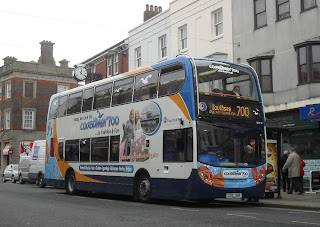 Back in 2005, route 700 was operated using Volvo Olympians and Volvo B10M single deckers. Today, Scania N230UD with ADL Enviro400 bodywork operate the main route between Southsea and Brighton. Here is 15597 (GX10HBF) today, one of a number I managed to photograph. 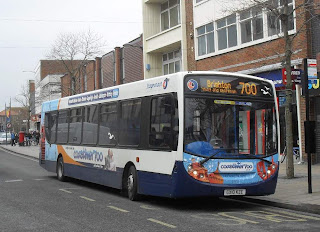 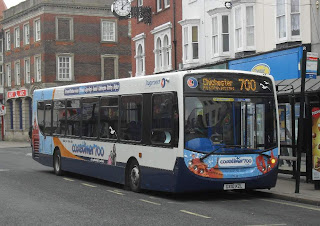 The most recent change to Bognor bus services and the 700 is the introduction of these Enviro300 single deckers, which operate the shorter Chichester to Brighton and Arundel to Brighton journeys. They carry single deck versions of the larger Coastliner 700 branding, still focusing on a particular place the route serves. These also carry (Arundel) along the top of the bus to advertise those variations of the route. Pictured first is 27652 (GX10KZE) heading for Brighton, with a photo of 27658 (GX10KZL) heading the other way, towards Chichester, underneath. 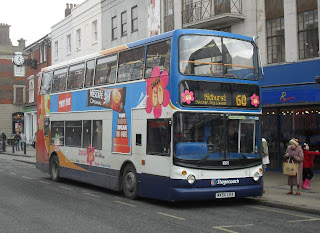 Route 60 operates between Bognor Regis and Midhurst/Summersdale, using primarily a mix of second hand Dennis Tridents - this one is former Stagecoach Manchester 18193 (MX54LRA) - or second hand Dennis Darts. As illustrated, they carry a 60s-inspired Hippie livery for the route. 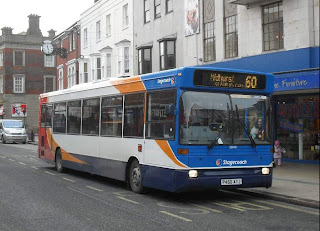 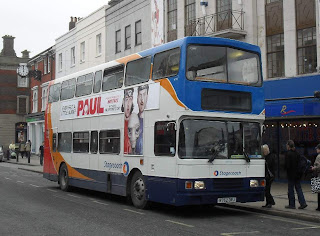 Route 60 operates every 15minutes between Bognor and Chichester, interworking with route 700 to provide a bus to Chichester every 7 or 8 minutes. The 60s split at Chichester, with a half-hour frequency to Midhurst, usually operated by double deckers, and a half-hour frequency to Summersdale, usually operated by former Sunderland and Oxford Dennis Dart SLFs. To the right are two of the slightly rarer allocation on route 60 - a single deck working on the 60 to Midhurst in the form of Dennis Dart SLF 33040 (P466AYJ), and secondly former Manchester Volvo Olympian 16752 (R752DRJ). 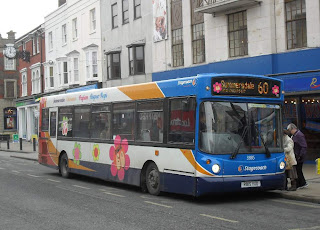 Here is the regular allocation on the Summersdale workings - 33815 (R815YUD), one of 5 Dart SLFs that operate the route sporting a single deck version of the route 60 branding. 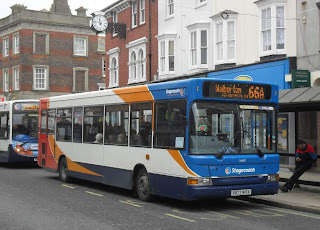 One of Chichester's shorter Dart SLFs tends to operate route 66/66A - this is former Stagecoach London 34107 (V107MVX) seen pausing between journeys. The 66/66A is an hourly-ish route that has a PVR of one - there is a bus every hour, but not the same minute of every hour! 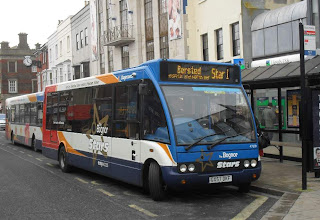 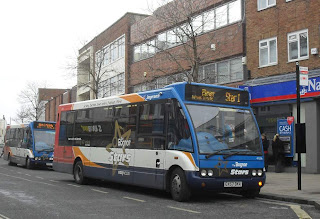 I've been waiting a while to get some photos of the Bognor Stars Solos. The Solos formed part of the regeneration and rebranding of Bognor's town services. The 63 became Star 1 and the 61 became Star 2, upgraded from Mercedes-Benz 709D operation. Firstly, we see 47539 (GX57DKF) pausing in Bognor Regis town centre on a Star 1 to Bersted, with the second photo illustrating two Solos on the Bognor Stars routes - in the foreground 47536 (GX57DKA), on the Star 1 heading for Elmer, with 47541 in the background. The Star 1, Star 2 and 67 are all Bognor Regis town services which pass through the town between destinations. It seems to work really well in the town, and the Solos certainly suit the customer base. 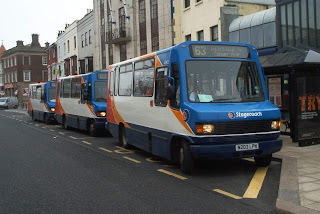 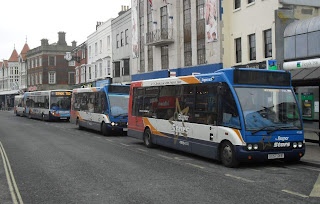 Finally, back in 2006 I took a shot of three Mercedes-Benz 709Ds lined up on town services 61 and 63 in Bognor Regis town centre. This was mainly because I was unfamiliar with the Stagecoach Merc- Stagecoach in Portsmouth (my local company) didn't have any, and my closest examples where in Winchester. However, it has allowed me to visably illustrate how much the town services have changed since 2004 - the 3 Mercs are long gone, and the three Solos in the second photo have directly replaced them. I wonder how different Bognor will be in another 7 years time...
Related Posts:
Southern England Bus Scene - Bognor Regis in 2004
Transport Illustrated - Hants & Sussex Part 2
Posted by bus80d at 19:47