Graham's blog at Plymothian Transport is carrying an entry at the moment illustrating the return of Mayflower Link route 93 branding. Rather than copy what he has put, I thought I'd share some of my experiences of route 93... 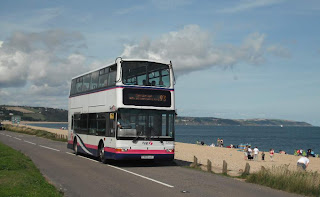 Route 93 connects Plymouth with Dartmouth and is one of the trunk routes operating across the South Hams - connecting Modbury, Kingsbridge, Torcross and various other villages. It operates hourly using former London Dennis Tridents - illustrated here by 32803 (T803LLC), photographed at Torcross in summer 2009. 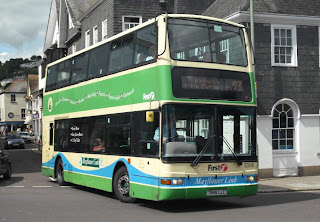 Three Dennis Tridents had a green, cream and blue Mayflower Link livery applied. This was very popular amongst most enthusiasts, and, judging by the fact FDC have withdrawn largely from the area but kept the 93, helped boost passenger numbers and give an image for route 93. Trident 32846 (T846LLC) illustrates - pictured in Dartmouth. 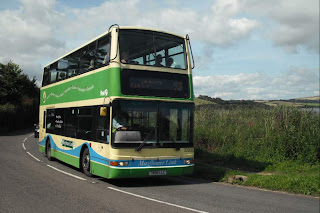 The other two buses which received Mayflower link livery were 32802 and 32808 (T802/8LLC) - the latter illustrated here in Torcross. These buses replaced Bristol VRs and Leyland Olympians, and have since been replaced by younger Dennis Tridents. 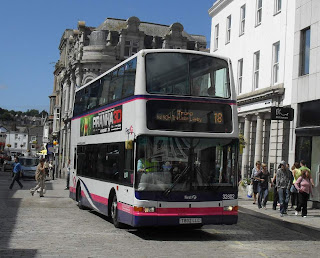 Life after the 93, here is Trident 32802 (T802LLC) pictured in Truro city centre last summer on route 18. Originally, they all arrived in simple Barbie livery, but 33176 has emerged from Plymouth's paintshop in a very similar, but slightly updated Mayflower Link livery. I'm glad this livery has returned.
For the original post, see Graham's posting - including 33176 in its new livery.
Posted by bus80d at 19:14