First Southampton have been running their Millbrook Flyer for 5 or so months now. The X2 was brought in as part of the Southampton network revisions in April this year. The 2 and the X2 each run every 10 minutes, forming a 5 minute frequency between Millbrook and Southampton. This is more than BlueStar's 8 buses an hour, plus the X2 is more direct. 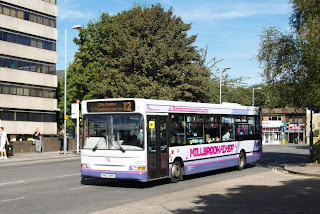 First have branded four of their 1997 batch of Dennis Dart SLFs as the Millbrook Flyer. It certainly stands out in Southampton, and with buses buzzing around in each direction, it is quite visible. PVR appears to be 5 - at least on a Saturday (the frequency is the same Mon-Fri) - a former Glasgow Dart was the fifth bus on the route on Saturday just-gone. Here is 42527 (R427WPX), numerically the last WPX, heading for Southampton Central rail station around Saturday lunch time. 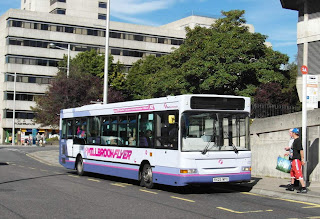 This route really puts the "first bus that turns up" or the "quickest route" philosophy to the test. First's Dart SLFs are 8 to 9 years older than BlueStar's Citaros, bit with their shiny paintwork and dedicated branding, appearances can be disturbing. Here is 42525 (R425WPX) loading passengers at Southampton Central railway station. 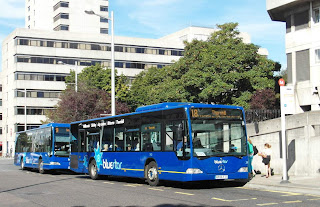 Here's the competition - many Mercedes-Benz Citaros recently transferred up the coast from sister company Wilts & Dorset. 2423 (HF06FTT) was new to Wilts & Dorset as their 173 back in 2006, and is one of several many smart Citaros in service with BlueStar. Indeed, Southampton has almost turned into Citaro City - with BlueStar livered Citaros operating regularly on routes 4, 9, 12 and 18, along with occasional services on the 2, 3, 6, 8, 10 and 11.

I doubt we'd ever get any public figures released by BlueStar or First to compare their figures, but this little case study would certainly be interesting. Indeed, First's new network has also seen the creation of further new services for both sides - First's 7 has been increased in frequency, and they've launched their new 11 to Hythe. BlueStar have launched the new 16, and new double deckers are possibly coming in on the 1 later this year. First also have further new arrivals on their way come the turn of the year. Interesting times ahead... again!
Posted by bus80d at 19:15