Lymington is a lovely little town on the south coast in Hampshire. The primary bus operators are Wilts & Dorset and BlueStar, and there is a half-hourly train connection to Brockenhurst and the main line. 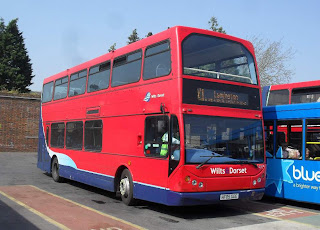 The main trunk route to Bournemouth is operated by 7 Wilts & Dorset Volvo B7TLs with East Lancs bodywork. New to the south coast in 2005 and convertable open toppers, these provide the main allocation on the X1 and X2. Both services run once per hour, meaning two buses an hour between Lymington and Bournemouth. 405 (HF05GGE) arrives in Lymington on an X1. 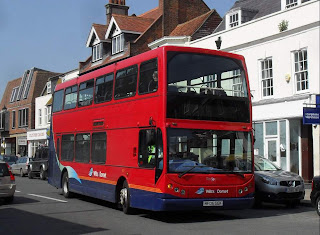 Of the Lymington Volvo B7TLs, only 407 (HF05GGK) has received the new 2008 Wilts & Dorset livery. 407 arrives in Lymington on the half hourly circular route 119 from Pennington. Despite carrying only small loads, the 119 is usually a double decker bus these days. 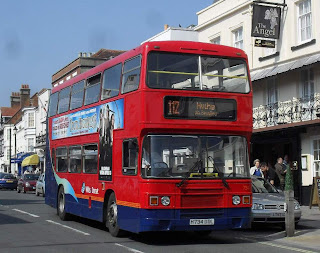 The third service Wilts & Dorset operate in Lymington is the two-hourly route 112 to Hythe. This route can see anything allocated at Lymington depot operating it - here is former Solent Blue Line Leyland Olympian 734 (H734DDL) returning to a familiar area - it would have operated to Hythe frequently as an X9, 37 or 38 in its days with SBL. 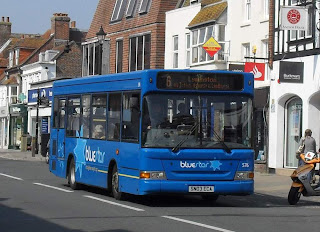 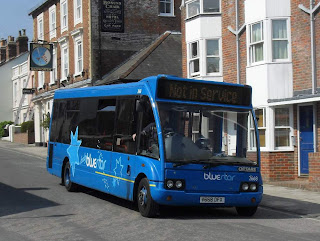 The biggest recent change to Lymington bus services is the introduction of BlueStar to the town. The BlueStar brank (based Marchwood & Wilts & Dorset rather than Eastleigh) have taken over routes 56/56A from Southampton to Lymington, introducing Transbus Dart MPDs to the town for the first time. In the first picture on the right, 576 (SN03ECA) arrives in Lymington from Southampton. Solos are also used on the 6 - the second image shows 2668 (V668DFX) heading to Lymington depot as the driver has his lunch break. The 6 is run, as a BlueStar branded service, from Lymington (Wilts & Dorset) and Totton (Marchwood Motorways), meaning there are technically two operators serving passengers on the route. All buses should be in BlueStar blue, but sometimes a red Solo slips on to the route. 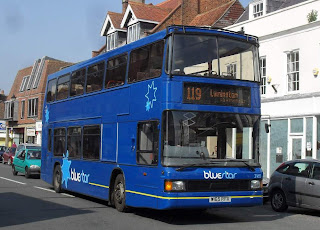 And this is what should be on route 6... 3 DAF SB250/Optare Spectras have been repainted into the blue of BlueStar for route 6, but unfortunately cannot operate the route yet due to overhanging trees requiring attention. 3165 (W165RFX) finds service on local Wilts & Dorset route 119 rather than heading for Southampton - as the bus is still legally owned by W&D it is therefore fine to operate the 119, even if in BlueStar livery. 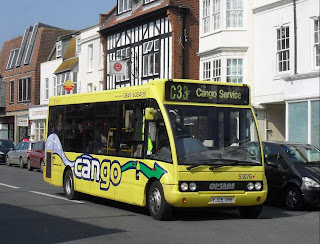 Finally, a couple of years ago First Hants & Dorset won the Cango services from Wilts & Dorset, along with the HCC-owned Optare Solo bus. First's 53076 (YJ05XMR) is pictured arriving in Lymington earlier today on Cango service C33.
That's all of the Wilts & Dorset depots visited and photographed in 2011 - I've already taken more W&D photos this year than I ever have in one whole year before. Thanks for viewing!
[Note: Wilts & Dorset's Lymington depot operates a large number of Olympians from it for the Brockenhurst College services and other school routes. Furthermore, on Wednesdays there is a market bus route 118 to Ringwood from Lymington - I've never seen it but presumably this also uses an Olympian from Lymington]
Posted by bus80d at 15:14