Today's Sunday Lost Scenes comes from the summer of 2003... 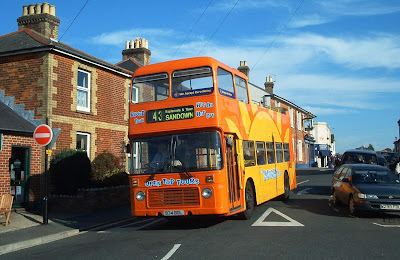 The Southern Vectis summer services for the year have been announced. Back come the Needles and Downs Breezers at every 30 minutes, together with the Shanklin Steamer and Island Coaster. It is expected to be the last year of the K reg Leyland Olympians on the Needles Breezer - to be replaced next year possibly by two of the Lymington convertible Volvo B7TLs. Today's post looks back to the previous regime, of Bristol VRs earning their keep.

683 was in service for many years before I was even born - let alone a bus enthusiast. I very much caught 683 on its last duties on the island - I didn't even manage to grab a photo of it in green. 683 was the "spare" VR for the island, which required 2x for route 42 (now Needles Breezer), 2x for route 43 (The Sandown Bay Tour), and the Old Girl (Bristol K) for the newly introduced Downs Tour. The side boards were swapped depending on which route it was allocated to. It was my last VR to capture on the island.

I've always thought this livery was particularly effective - simple, bright and immediately communicated the service to the travelling public. It was replaced by the Best Impressions Breezers when the VRs were replaced by the Olympians. It has all been lost now, only kept in the memory and on photographs. DPX683W, incidentally, went to York Pullman after service on the island.
Posted by bus80d at 21:38