Yesterday, I finally managed to grab a few more photos of the recently acquired Dennis Dart SLFs from First Devon & Cornwall. My visit to sunny Southsea on Sunday threw up 40959 and 42778. 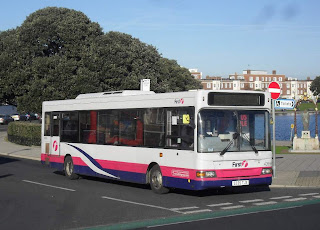 First up, here is Dennis Dart SLF 40959 (S335TJX), which began life in Hong Kong before moving to Scotland at First Edinburgh. It was acquired back in spring 2010, and has received a repaint since I last saw it. Pictured on route 6 heading for The Hard. My camera has, unfortunately, seemed to pick up a bit of dirt on the lense in the top right corner - I need to take it to a Samsung shop and get it cleaned! 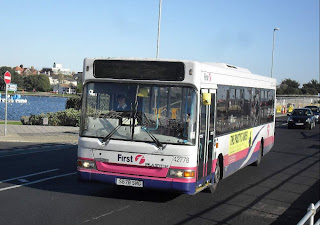 What is it about the LEDs on these buses? 42778 (S678SNG) is another former Hong Kong Dart SLF - but this time first entered service in the UK with First Eastern Counties. It is pictured on Sunday only route 16A, which connects Portsmouth city centre with Hayling Ferry, via The Hard, Old Portsmouth, Clarence Pier and South Parade Pier. Indeed, the 16A provides the only regular service that operates along the entire Portsmouth and Southsea seafront these days - it seems odd there isn't a need for the service at least in summer weekdays. 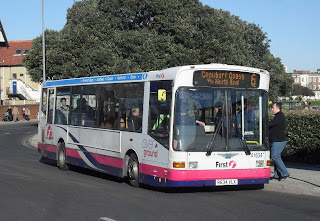 Finally, the old order and one of only 7 Dennis Dart SLFs with Marshall bodywork on last count still in service from Hilsea. 41634 (R634VLX) was acquired from London in February 2004 as route 6 was upgraded from Iveco operation. I've always liked the Marshall bodied Dart SLF - I hope these remain in service for a little longer yet.
Posted by bus80d at 18:20