It was announced on the First Hants & Dorset forum last week that the three remaining former People's Provincial Dennis Darts may not see past April, with Volvo B7RLEs for the new Eclipse routes imminent. 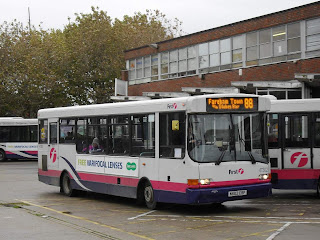 Purchased in 1995 as the last batch of new buses to People's Provincial, 7 locally bodied UVG Urban Star bodied Darts entered service in Provincial green and cream. Taken over by First, these quickly were repainted into red and cream and have formed the backbone of many services ever since. Three remain in service from the initial batch - one is 47302 (N602EBP), pictured here on route 88 in Gosport bus station. 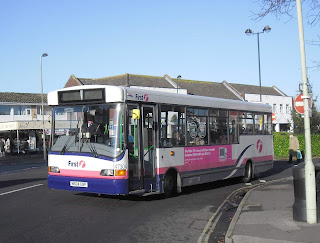 The Provincial Society organised a running day last month to celebrate the final three - here is 47304 (N604EBP) on that day, pictured on route 33 heading for Hill Head. No doubt intentional, the Darts operated routes 33, 34 and 36 - three routes that have changed very little since those Provincial days. 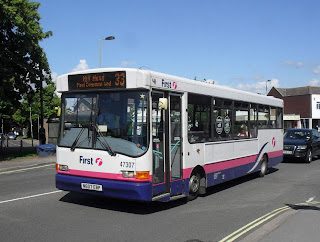 The final one in service still is 47307 (N607EBP) - numerically the last. She is pictured in Stubbington earlier this year on route 33 on a very sunny morning. It will be sad to see these go - especially as it has been suggested they are on their last legs, and thus any preservation attempts would be expensive.
First to go was N605EBP - the only one never to receive First's Barbie national livery (it was scrapped in Barbie 2). This one went in October 2009, followed next by N601EBP. This one was delivered with a calculator style number display and internal LED display - the one one to receive these features. I believe it was the regular rally bus in it's initial years. The next to go was N603EBP - followed in 2011 by N606EBP. Catch the remaining three while you can! Your most reliable routes are anything around Fareham - particularly the 33, 34, 35, 36, 57, 87/87A and 88.
Posted by bus80d at 11:00