This Sunday's lost scenes is from Weymouth in June 2004... 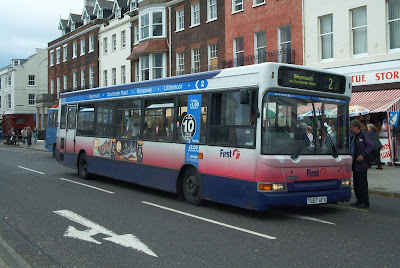 First Hants & Dorset 42827 - T827AFX - Weymouth King's Statue - 1st June 2004
My shot this week illustrates a lost livery and a lost style of branding. Weymouth depot repainted their T reg Dennis Dart SLFs in 2002-3 into Barbie 2 livery. Barbie 2 was applied to vehicles that either were step entry, or didn't have the First corporate interior. In actual fact, some buses were wrongly painted into Barbie 2, or wrongly not painted into Barbie 2. One incident to illustrate this was when Hoeford depot received Dart SLF/Marshalls P136NLW and P137NLW in 2003 - one came in Barbie 2 and one came in low floor fleet livery, despite them being identical vehicles.
42827 is actually painted correctly, due to the lack of a corporate interior. Dart SLF/Pointer 2s were rarely painted into Barbie 2 because the majority were new to First, rather than the preceding independent company. T826-9AFX were acquired by Southern National - not First - hence this rare occurance.
I actually thought this livery quite suited these Darts and, as I only managed to capture two on camera, it was a sad day when they were repainted out of the livery. They still regularly find themselves on route 2, and are still at Weymouth for the majority of their time.
Posted by bus80d at 11:00