An Everyday Saturday in Ryde...

Over the weekend, I travelled over to Ryde on the Isle of Wight. Here are a few photos from the day, documenting a standard Saturday bus scene. 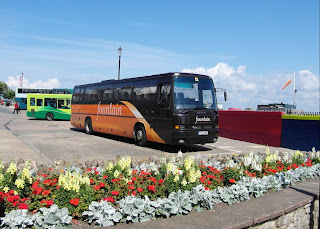 The first thing to meet me off the Hovercraft was this coach. 7225 (P125RWR) is a DAF3000 with Ikarus bodywork, allocated to the Fountain Coaches division of Southern Vectis. It is pictured here, parked up in Ryde bus station out of service. 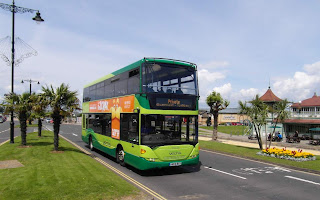 Ryde Esplanade was looking wonderful in the sunshine of Saturday. We seemed to stay away from the cloud that was hanging over the mainland. Scania Omnicity 1148 (HW09BCK) heads away from Ryde bus station out of service. 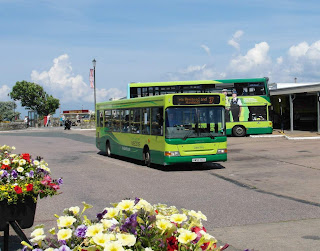 One of the buses on the Saturday route 4 / 37 circuit has been one of the ex-Wightbus Dart SLFs for my last two visits. For Saturday, it was 3363 (HW54DCU), departing Ryde bus station. The other bus was an Omnicity. Route 37 is a Ryde town route that circulates around Binstead and Haylands, predominantly carrying free bus pass holders. Nonetheless, loads for Saturday appeared to be good. When I started photographing in Ryde, Darts were frequent sights, first with step example operating routes 1, 4 and 8, before MPDs took over in 2005. 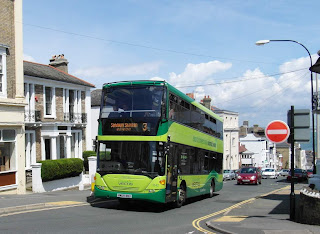 Another of Southern Vectis' many Southern Vectis Omnicitys out in use regularly on the island. This one is 1142 (HW09BBU), and is pictured heading for Newport on route 3, via Brading, Sandown, Shanklin, Ventnor and Godshill. 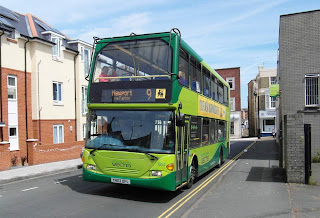 My last ex-Metrobus Scania Omnidekka I needed to photograph this year was 1054 (YN03DFL). It still carries the school bus sign, leftover from its days as part of the Southern Vectis school fleet. It has just turned away from Ryde high street as it heads to Newport on high frequency route 9. 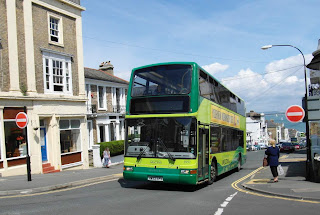 I still haven't caught up with Southern Vectis' two former Go Ahead London Volvo B7TLs that are in green. Nevertheless, here is native 1997 (HW52EPV) pictured against a backdrop of the solent, as it heads for Newport on route 9. 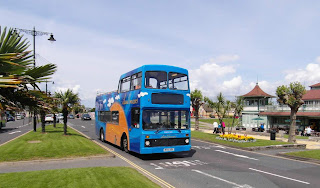 The island service fleet seems quite stable at the moment, with a core network firmly established providing a great service. Changes will come with the school fleet, with SV winning a new contract warranting new buses. The forthcoming changes will be very interesting!