First Hants & Dorset have never operated any Tridents from new. However, over the past couple of years a number of second hand examples have joined the fleet and are in service from Weymouth. Here are a number of photos of the buses in service in the seaside resort. 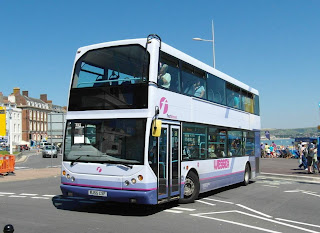 First up, here is the smartest and the most recent acquisition. Proudly wearing First Wessex fleet names, former Devon & Cornwall Trident 32763 (WJ55CSF) is pictured on the X53 about to head for Poole. 32763 was new to Falmouth outstation in Cornwall, for use on the 89/90 Falmouth - Newquay route. It has since spent more time on the X80/X81 Plymouth - Paignton - Torquay route. Although questions have been asked about the paint matching the lines of the bodywork, this bus is extremely smart when you see it up close. It also has a small amount of branding on the rear for route 10 - a route it will operate in conjunction with route 1 in school term time. 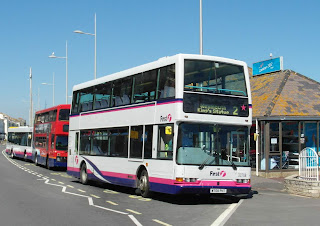 Bristol have sent two Tridents down to the south coast following FHD's route 387 (Poole - Dorchester win). 32708 (W708PHT) was enjoying the sights and sounds of route 2 earlier on this week - a route that seems to be predominantly double decker worked this summer. 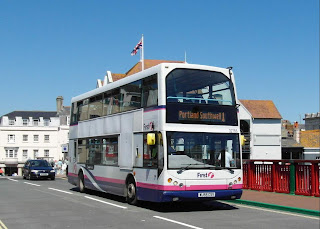 Thunderbirds are go! 32766 and 32767 were acquired last summer as emergency Thunderbird vehicles to ensure reliability on routes 31 and X53. 32767 has returned to Devon, but 32766 has now moved to Weymouth, and is pictured here bolstering capacity on town route 1. 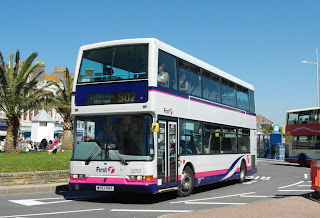 The second East Lancs Lolyne bodied Trident in the Weymouth fleet is 32707 (W707PHT), pictured here on the summer route 502. It is photographed at King's Statue. Both of these Tridents are pristine in appearance, having recently received a coat of Barbie before the new livery was introduced. 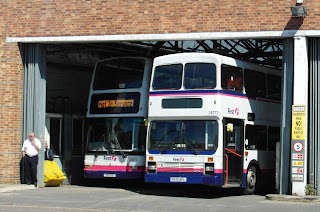 Finally, hiding away in Weymouth depot is former London Trident 32876 (HIG1527, or T876KLF if you prefer). Two Presidents are on loan from First Devon & Cornwall for the summer to boost capacity, and a couple of drivers were investigating their new toy in this photo.

The Tridents certainly add variety to Weymouth and Portland. They make the bus scene more interesting and I had a good time getting the best angles for photography. Thanks for reading.
Posted by bus80d at 23:00