The End of Red Bus

As has been widely published over the past few days, the Competition Commission have refused the sale of First Devon & Cornwall's Barnstaple depot to Stagecoach. Following this, First have confirmed they will withdraw all services operated from North Devon with Stagecoach and Western Greyhound launching new routes to cover these. It marks a sad end to a situation that could have been handled differently by the OFT. 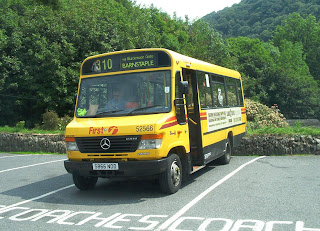 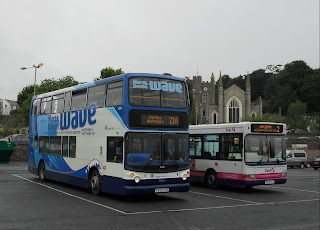 The end of the competition? On the majority of routes yes. This picture kind of sums up the scene over the past few years - specifically branded Tridents competing against old Darts and tired Tridents of First. Yes, First have been operating 5 Tridents new in 2005 on the 1 / 2 set of core routes, but two of these went on holiday last year to Dorset, and all 5 have gone on holiday this year to Plymouth over the summer. 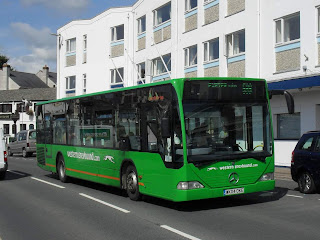 The only route to see at temporary winner in this whole business is the Bude - Exeter corridor. Presently exclusively First (except two Western Greyhound departures and Sunday operations), the corridor will now have an increased Western Greyhound 599 competing against a newly introduced Stagecoach Devon X9. Certainly a temporary benefit for the customers - but how long will this last? And I bet fares won't be interchangeable.

Lets spare a thought for the drivers and depot crew at Barnstaple. A few may get a new job with Stagecoach, who are introducing replacement routes. All will get a temporary redundancy - deepening First's pockets even further. A couple may even go to Western Greyhound or Filers, but this could be hit and miss due to location logistics. I hope they get a satisfying solution sooner rather than later, and aren't without a job for too long.

The new Stagecoach Devon network will look very similar to the First network of 2005 now. Core inter-town routes connecting Barnstaple, Bideford and Ilfracombe, with a few local services from each of those towns. They will also operate the tendered Holsworthy, Hartland and South Molton routes, with commercial exploits to Exeter and Croyde. They've also won the Bude town service - so at the next retendering, will we see Stagecoach move in on the remaining Bude local routes? Interesting times ahead for the enthusiast, although very disheartening times for all involved with First.
Posted by bus80d at 11:00