This week's Sunday Lost Scenes is an image rather than a bus or service... 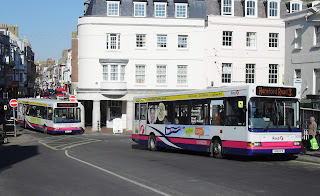 Weymouth is, at present, undergoing an Olympic transition. With hundreds of buses arriving in the town from a wide variety of bus fleets, I feel confident to say that the Weymouth bus scene has never been so busy, varied, or perhaps, young! With Olympic Park & Ride buses for both athletes and spectators coinciding with upped frequencies on the First operated town services, there is a lot of variety to be found in Weymouth.

I choose just a small token of that variety to document today. Pictured above are two of the native Southern National Dennis Darts, both with old Yellow route branding for route 10. Both Darts are off route, kept to local town services in and around Weymouth. The KPR batch are presently going through a rather surprising refurbishment and repaint, deployed back out on the Dorchester - Weymouth corridor. They are receiving the new livery, and rumour is leather seats also. 42821-3 have been done so far, and I hope to bring you some photos of these later on this week.
Posted by bus80d at 11:00