Today's Sunday Lost Scenes comes from Brighton, from my first visit in 2010... 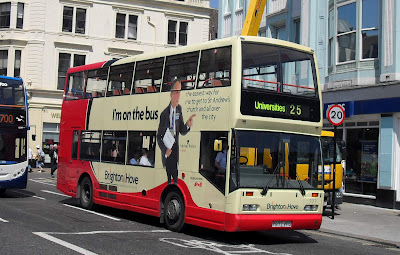 The last type of non-low floor double deck to operate in Brighton were these Scanias with East Lancs Cityzen bodywork. Brighton & Hove once had a sizeable batch of these buses, but back in 2010 they were on their last legs in the fleet, with only a reduced number in service. Today, only one remains, and this one is strictly dedicated to open top tour work. These buses are very rare around the UK - I think I've only ever photographed two, and these were both on this trip in 2010.

777 (P877VFG) moved on to M-Line Coaches in Alloa, although at least initially it retained Brighton & Hove livery and bus seats. Deliveries of Volvo B9TLs to route 7 eventually killed off this type in the fleet, which caused the cascade of Dennis Tridents onto routes where these found work. This photo is a surprise working - 777 was on the high profile route 25, a 24-hour route connecting the Universities with Palmeira Square.

Another lost scene from along the south coast.
Posted by bus80d at 11:00