Waking from the Slumber...

Firstly, massive apologies to my regular visitors for the lack of posts this month - a lot has happened, which I have, unfortunately, largely missed due to other commitments in my life, coupled with two fairly bad spells of illness. May has not been good for my bus hobby!

For the first time this month, on Saturday I managed to grab some bus photos on my first visit to Shanklin in three years, and it was great to get back out with the camera. 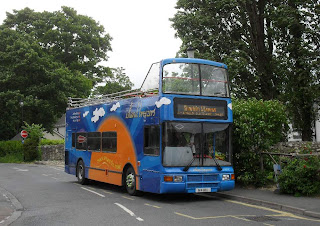 First up, the highlight of my trip. Here is former Wilts & Dorset DAF SB250/Northern Counties Palatine 2 - the bus that toppled over in the Sandbanks a few years ago - now in service on the island and seen on the "Shanklin Steamer". The "Shanklin Steamer" is a tourist route, designed for single deck Volvo B10M 625 once the open top conversion has been completed - operated by 614 (N14WAL) until 625 is ready to enter service. Pictured in Shanklin's Old Village. 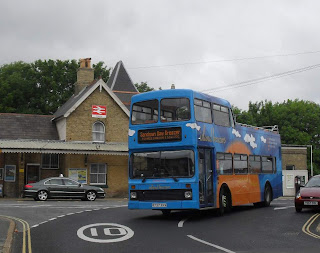 Since my last visit, Wightbus' Rail-link route 16 from Shanklin to Ventnor has been lost, replaced by Southern Vectis' service 3. The "Sandown Bay Breezer" also now serves the station - here is 637 (R737XRV) against a backdrop of Shanklin rail station. 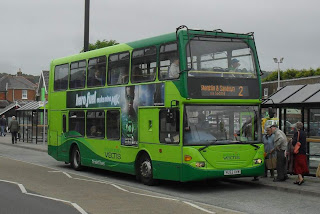 I've managed to complete my photos of the former Metrobus Scania Omnidekkas - 1053 (YU52XVN) was the last one I needed to photograph and is pictured here at Landguard Rd- on the former site of Shanklin bus station. 1053 has arrived from Newport on route 2 - heading for Ryde as the 2 has been extended back to the seaside town for the summer season. 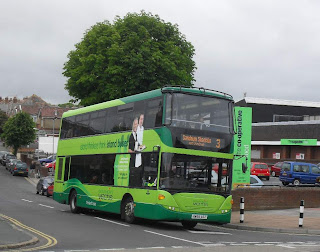 Younger Scania Omnicity 1112 (HW58ASZ) heads for Ventnor on route 3. The Co-operative is on the site of the former bus station, which closed before I was born. 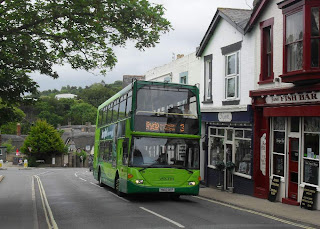 Shanklin's Old Village gives the chance for some picturesque photos and really makes up for the rather poor photographic conditions along Landguard Road. Former Metrobus Scania 1055 (YN03DFP) heads for Ryde on route 3. 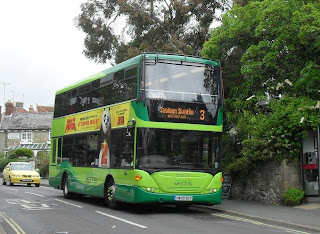 Finally for this evening, here is Scania 1151 (HW09BCV) again in Shanklin's Old Village, this time heading for Ventnor and Newport on route 3. In the summer (and when it is sunny), I intend to return to get some cracking shots of the green Scanias heading up past the thatched cottages, or the open toppers heading up from Sandown Bay.
All photos can be found at my Smugmug site - click here for a direct link. Over the next week I intend to make postings semi-regular again - there may be another dip in the following two weeks but all posts should recommence at a regular interval from mid-late June. Thanks for viewing :-)
Posted by bus80d at 23:18 2 comments:

Apologies to all for the lack of posts and photos at the moment, I am quite often working 14-15hour days and haven't had the time to post an update. The blog hasn't finished and there is a chance of a few posts over the weekend - Thanks for viewing as always!! :-)

First Hampshire, Dorset and South Somerset (ok, I'll stick with FHD) are set to announce their next set of changes to the Southampton network next week. Most routes have changes on, but the biggest change simply from VOSA appears to be the 11 and 12. 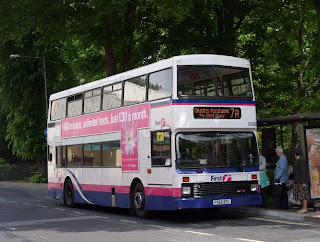 The 11A, 11C, 12A and 12C at present connect Southampton City Centre to Sholing, via Woolston and Bitterne. The 11s go via Butts Road in Sholing, white the 12s go via Botley Road. The As go around the circular in an anti-clockwise direction, heading for Woolston first and heading back to the city though Bitterne, while the Cs go first to Bitterne. These routes replaced the existing 5/5A and 7/7A to Sholing in 2008, as the majority of cross-city routes were altered to terminate at the city centre.
VOSA indicates a new 11 and a new 12 have been registered from 12th June. We aren't sure yet of what changes will occur to these routes, so I can only speculate. Possibly the 11 going via Bitterne and doing a circular of Sholing, and the 12 via Woolston and the same? Or a frequency increase to compete with BlueStar 18 - recently increased to 8 buses an hour? We will find out next week, hopefully. 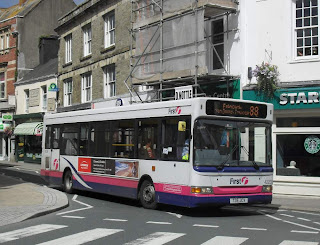 What is known is that service changes in Southampton are seeing potentially 7 more buses arrive in the city. At least one further Hong Kong Dart SLF is arriving from First Hants & Dorset's Plymouth depot, along with at least 2 former Truronian Darts - T32JCV and T34JCV are confirmed. These are very similar to sister 42235 (T35JCV), pictured to the right. 3 buses haven't been confirmed yet, 42235 could potentially move too. Furthermore, it is expected that Weymouth based Volvo B10BLE 66156 (S356XCR) will also move east.
The Dart SLFs haven't been confirmed as for Empress Road - there is some talk from the company that these will move to Hoeford, concentrating that type in the east of the company. This will cause 5 of the ex-Glasgow Darts at Hoeford to move back to Southampton (40822/5-7 were previously allocated to Portswood) and 41515 (R415WPX), which was of course new to Southampton. Interesting times ahead- and that's before any of the network changes are confirmed!
Posted by bus80d at 13:11 No comments:

Details are emerging of the changes to the New Forest Tour for the 2011 summer season. 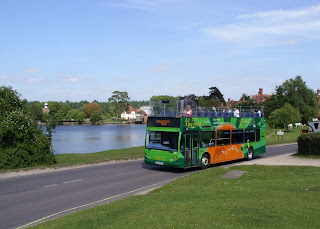 The traditional and established Green New Forest Tour will enter service on the 25th June, using the existing BlueStar based Volvo B7TLs 408 and 409. The Green Tour operates from Lyndhurst, to Brockenhurst, Lymington, Beaulieu and Exbury at a frequency of one an hour, requiring two buses. 409 (HF05GGP) is pictured above on the 2008 New Forest Tour at Beaulieu. 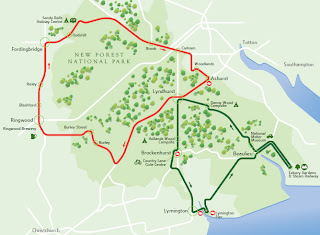 Exciting news is the introduction of a new Red New Forest Tour - from Lyndhurst, to Burley, Ringwood, Fordingbridge, Cadnam and Ashurst. The Red Tour will also operate hourly, which mean two buses will probably be needed to cover the PVR.

This will presumably be operated from Wilts & Dorset's Ringwood depot - either using some of the convertible open-topper Volvo B7TLs at Poole, or using any ordinary closed top decker if that is not the case. The Red Tour will operate from 23rd July - a later start date than the green tour. Certainly, the "red tour" would suggest a bus in base-W&D livery with the appropriate graphics applied.

The tickets are a flat £12 adult fare, or £30 group (5 people) fare, valid on both routes, for two days, with the possibility of "hopping on" and "hopping off" as many times as you wish.

Both routes converge on eachother at Lyndhurst, and although there have been no timetable details released yet for the Red Tour, presumably the tours would meet so passengers can mix and match. Common sense would suggest this would be the case anyway, but I have no evidence to back that up.

Should mean for an interesting summer- and given a good few sunny days some excellent time spent out in the forest photographing these two routes.