Seashells on the Seashore

RATP Yellow Buses of Bournemouth are a fleet going from strength to strength. Furthermore, they are increasingly a goldmine in terms of fleet variety for the enthusiast. As other companies increasingly standardise the fleet, the recent additions of old style Enviro300s, Solos, Enviro200s and now Volvo B7RLEs with the rarer Plaxton Centro bodywork mean that Bournemouth is certainly an interesting place at the moment. 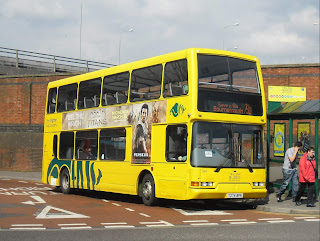 The seashell livery is also being rolled out across the fleet. Not all buses are completed yet - some of the younger double deckers still retain their Transdev blue stripe - but I'm increasingly liking this livery. I think it looks particularly effective on the single deckers, where the bare yellow is less. Trident 274 (T274BPR) models the livery, pictured loading passengers at Bournemouth Transport Interchange - just outside the railway and coach station. 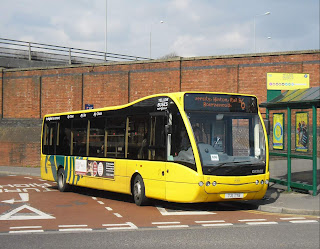 Optare single deckers form the backbone of key town services 1a, 3 and 6. Versas, such as 21 (T21TYB) tend to form the main allocation on the 3 and the 6 from my observations last week. You will note that the registration retains TYB - Transdev Yellow Buses - the former operator of Bournemouth Transport. 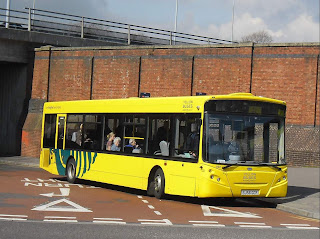 One of two older style ADL Enviro300s in the fleet - this one is 592 (SJ56GCF) - which were both recently acquired by RATP Yellow Buses. This one is pictured on route 5, not that the image would be able to tell you that. 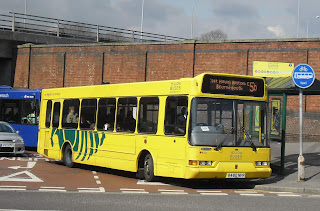 I've always liked this bodywork on a Dart - the East Lancs Spryte. I've never ridden one, nor have any idea as to the quality of build - it just looks good in my opinion and is fairly rare, breaking up the monotony of Pointer bodyworks. Here is 480 (R480NPR), which, knowing Yellow Buses' fleet renewal rate recently, probably doesn't have too many more years on the south coast. This is one that has gained the sea shell - two others I photographed on the day hadn't been thus far. 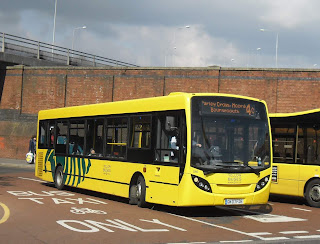 Three Enviro200s are operated by the Yellow Buses fleet - one of which was the first vehicle in the country to be branded for the Queen's Jubilee. 516 (GN07FDE) was acquired recently, second hand. 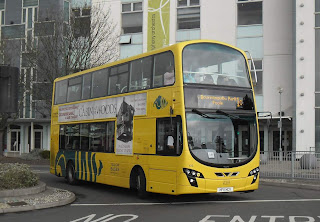 Finally for today, documenting the most recent investment in brand new buses, is on of 5 Volvo B9TLs with Wright Eclipse Gemini 2 bodywork operated by the fleet, predominantly on flagship routes 1b and 1c. These were the youngest buses on the south coast until last week. Yellow Buses also operate a large number of Volvo B7TLs, and have one of the youngest double deck fleets across the south coast.


Definitely a company going places, and it will be interesting to see which new buses and new locations may spring up in the next few years. Axminster was on the cards last year... where this year?!
Posted by bus80d at 22:00