Following an increase in PVR in Southampton and subsequent fleet transfers, First Hants & Dorset's Hoeford depot now operate 9 former Hong Kong Dennis Dart SLFs. All 9 have been transferred up from First Devon & Corrnwall - specifically from Plymouth - previously operating on the Ugobus network. Now the former Ugobus fleet operate from every Hampshire depot - Volvo B7RLEs in Southampton, Solos from Hoeford, and Darts from Hoeford and Hilsea.
5 have been transferred directly to Hoeford from First Devon & Cornwall. One example is 42773 (S673SNG), which is pictured on route 72 heading for Southampton looking spotless. This bus' appearance is a credit to First. Former Edinburgh based 40961, plus former First Eastern Counties based 42754, 42757, and 42780 were transferred directly to Hoeford along with 42773.
4 have arrived at Hoeford, having already operated for FHD previously at Hilsea depot. One example is 40957 (S372SUX), pictured in Stubbington heading for Gosport on route 87A. The other three are 40956, 40959 and 42759.
These 9 Dart SLFs have been joined at Hoeford by former Truronian T32JCV and T34JCV, which seem to spend all of their time on the 17, 18 and X42. Not sure why, or whether this is actually the case - these routes are simply what the buses are operating whenever I see them!
All photos taken yesterday in Stubbington.
Posted by bus80d at 10:00 No comments:

BlueStar's DAF or VDL SB120s tend to stick around route 18 (Millbrook - Thornhill), which is BlueStar's most frequent route, operating 8 buses an hour. This route competes against key First routes 17/17A (also at 8 buses an hour) between Southampton and Millbrook, and route 11 (at 6 an hour) between Southampton and Bitterne.
However, today, 554 (YG52CEN) was off route, exploring the delights of Portswood, Eastleigh and Fair Oak on route 2. 554 is pictured here in Sandy Lane, Fair Oak, the northern terminus of route 2. Route 2 operates at every 20 minutes and largely sees Volvo B7TLs. However, with a number off road at the moment for a number of reasons, 554 was drafted in. Despite being single deck, around Eastleigh it seemed to cope well with capacity, although the load out of Southampton may not have been the same.
BlueStar have recently acquired a further 4 DAF/VDL SB120s from Go North East, and are in the process of rebranding and refurbishing their existing DAF fleet into the darker blue and stars livery.
Posted by bus80d at 15:13 No comments:

On 6th June, I visited West Wight for the first time in over five years, as I wanted to get some of those famous Needles Tour shots for myself! Advertised as one of the most spectacular bus rides in Britain, the Needles Tour is operated by Southern Vectis' two remaining K reg Olympians - K742ODL and K743ODL - at a frequency of every 30 mins.
The Needles Tour travels out on the bus only road/footpath down to the Needles Battery from Alum Bay. On a gloriously sunny day, such as the 6th June, fantastic photos were on offer, such as this view of 643 (K743ODL).
642 (K742ODL) is pictured here heading for The Needles, at present in Alum Bay. These Olympians are the only motorised vehicles allowed along the road to The Needles. There is a new feeder service - route 21 - which brings the buses from Newport to Yarmouth to begin operation of the tour each morning.
Southern Vectis operated 9 Leyland Olympians with K-registrations from new. The other 7 are now with Wilts & Dorset across the solent - a number are allocated at Lymington depot. Therefore, you can photograph these two in Yarmouth, travel across on the ferry, and then photograph more of the same batch! 643 is pictured in this view.
For an individual traveller, I thought Southern Vectis offered great value. For my £5 day rider (half price due to student discount), I sampled:
* Scania 1143 from Ryde esplanade to Ryde St Johns Church
* Scania 1146 from Ryde esplanade to Newport bus station
* Scania 1142 from Newport bus station to Alum Bay
* Volvo Olympian 643 from Alum Bay to Yarmouth
* Scania 1117 from Yarmouth to Newport
* Scania 1145 from Newport to Ryde
Excellent value! Thank you Southern Vectis.
Posted by bus80d at 16:01 3 comments:

Not back for the summer...

First Devon & Cornwall have expanded some routes for the summer (route 3's frequency in Ilfracombe, route X81 to Dartmouth) and introduced some new routes for the summer (such as Open Top route 8 in Croyde). However, one of last year's introductions is not returning for the summer...
Route 397 was introduced last summer by First Devon & Cornwall operating between Truro and Padstow. It marked FDC's first service return to Padstow since they withdraw the 55 (replaced by Western Greyhound's 555) - although they do still operate the summer P&R and college services into Padstow.
When they introduced the route, I had to foresight to save the PDF leaflet as I thought the service may only last one year. Advertised as the direct service between Truro and Padstow, the route operated Monday - Friday four times a day in each direction. The usual bus to operate the route were second hand Volvo Olympians, such as former London and Bristol 34041 (P241UCW), illustrated outside Padstow's former rail station. A family ticket return was only £10, which I feel was good value. Unfortunately for First, the route did not attract enough custom, or else it would have returned for this year.
Posted by bus80d at 14:19 No comments:

This is more of a news-y post, just to consolidate all the info of what is going on in First Hants & Dorset at the moment:

Hoeford:
Hilsea:
Southampton:
In simple terms, Hoeford have gained a further 3 Dennis Dart SLFs from Devon & Cornwall (can't be many left now!), and their first ex-Truronian examples in the form of T32JCV and T34JCV.

Hilsea have received 4 former London & Cymru Dennis Dart SLFs with Marshall bodywork -3 are in service already (41348 isn't yet) - these will displace 4 Darts to Hoeford - which will transfer the whole of the DUS batch of Darts (former Glasgow R642-7DUS) along with native Southampton bus 41515 (R415WPX).

That's the plan at the mo anyway. Could all change! Photos hopefully to come sooner rather than later - in the meantime I direct you to Matt Forbes' BlueMelon site and my FHD site's forum where you can see photos of most of the the new Darts in service.
Posted by bus80d at 23:46 No comments: 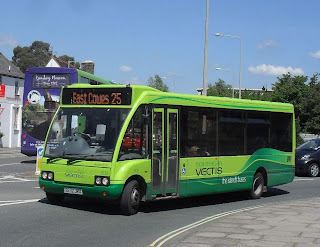 The Solos are a little tricky to find for the non-SV expert enthusiast. You can assume one will be on route 25 (Newport - Folly Inn and East Cowes), and this is where I found 2632 today, arriving in Newport on the midday arrival. Route 25 seemed to be very well used as it left Newport bus station. 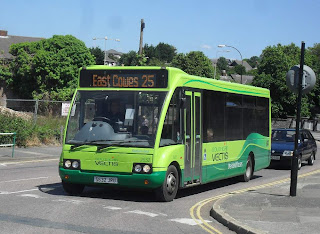 I think - like most buses - the Southern Vectis livery suits the Solo extremely well. Five Solos are operated by Southern Vectis - sister 2631 (in green) along with 2618 (W&D red), 2620 (SV green) and 2621 (W&D red). I saw 2620 on a route 7 today surprisingly - when I waited for it to return it had been replaced by an Omnicity, so presumably the bus was a late substitute.
I hope to photograph the other four Solos in due course - but for now I'm glad that I've got one!
Posted by bus80d at 21:36 1 comment:

With the arrival of 3 new Dart SLFs (2 normal length, 1 SPD), and the return to service on existing Dart SLF S162BMR, Velvet now operate a 100% low floor network across all passenger routes, with one spare low floor bus. This means that the Leyland Olympians, like the Volvo Citybuses before them, have largely been consigned to school, college and special event work, and the odd service when there are too many low floor buses off the road. Congratulations to Velvet, for such a young company, for achieving this important milestone. 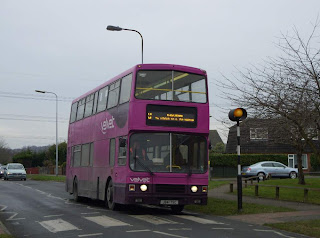 I've always found the Leyland Olympians awkward to photograph. For about a year, they were the main allocation on route A - but when you know something is definately on the route, you don't often get round to photographing it. Indeed, I've only ever taken one photo of an Olympian on the A.
My first photos of the Olympians came on the ill-fated route B - basically a route to switch drivers and manage breaks on the routes to Ringwood that were in operation back in 2008/very early 2009. Here is J841TSC heading through Velmore en-route for Eastleigh, pictured on Jan 7th, 2009. 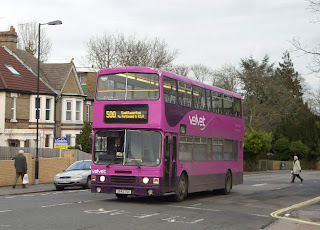 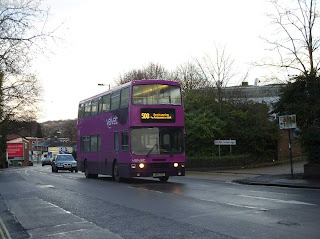 After the route changes of January 2009, which saw the 35/300/B cut and the Fair Oak Flyer/500 introduced, the Leyland Olympians were far easier to photograph. The 500 was off-peak work introduced in Jan 09, and the main allocation were the Olympians. I managed to capture all of them running through Portswood - as illustrated by J843TSC in the first photo, and secondly J851TSC in the second photo, going past the now-closed First Portswood bus depot.
As announced on the GSC forum tonight, the main allocations should now be 2 Darts and a DAF on route A, and 2 Darts and a Solo on route C, with another Solo on the S2 in Southampton. The Olympians will only cover service work if 2 (or more) buses are out of action, apart from joint school/college runs.
I hope to bring you photos of the Dart SLFs soon - I know where to find them, so its just a matter of going to get them. Mind you, that didn't really work for my Olympian collection...