With Southern Vectis taking over Wightbus' services and many of their vehicles at the moment, I thought the following photo would be very apt for this week's lost scenes. 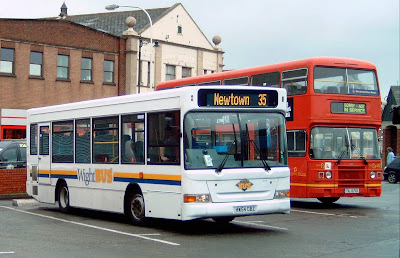 Wightbus HW54DBZ stood alongside Southern Vectis 710 (TIL6710)
Newport (old) bus station, 7th April 2005
HW54DBZ is now with Southern Vectis as 3328, and as far as I am aware is one of the few remaining in Wightbus livery with the fleetnames taken off. Southern Vectis TIL6710 is now on the mainland and was transferred over to Wilts & Dorset first in the SV green livery - I was lucky enough to capture it in service in Romsey in 2008.
I'm not sure why but a part of me always expected the "54" registered Darts of Wightbus to end up at SV. They arrived during the same registration period as Southern Vectis' 14 MPDs,  which may have had something to do with my thinking. Of course it is only due to the recession/government cuts etc. that they have ended up with SV, but it is interesting nonetheless.
Posted by bus80d at 11:45 No comments: 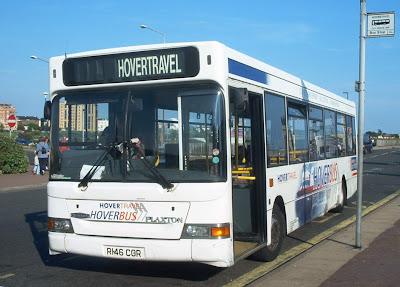 Hellyers of Portsmouth operated Dennis Dart SLF/Plaxton Pointer 2 R146COR for many years on the Hoverbus service from 1997. The service connected Clarence Pier's Hovercraft terminal with Portsmouth city centre. I couldn't find any reference of the bus on flickr or on google, so if it does exist and you know where, please feel free to comment and let me know! R146COR is pictured at Clarence Pier on 23rd May 2005. 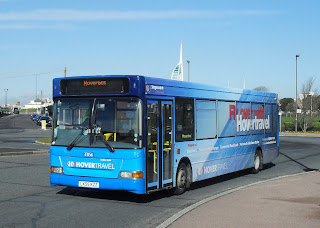 The bus was replaced with LK55KZZ when Tellings Golden Millar took over the contract in 2005 (one of their brief forays into Portsmouth), with Stagecoach taking over the service and the bus a few years later. This is it's first livery, but it has recently been rebranded and I look forward to photographing it in the next few weeks.
Posted by bus80d at 11:58 5 comments:

Just a quick blog entry to state a couple of my thoughts on the issues with Dorset schools at the moment. As you may or may not be aware, Damory (Go South Coast) have won the majority of school contracts, leaving First only with commercial journeys and subcontracting out a few school journeys to independents. The price of school bus fees has also been increased by over £100, and families are feeling the crunch. 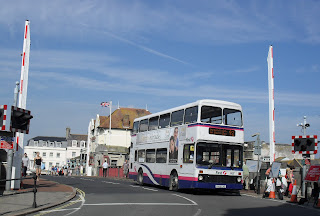 * The council price increases are expected in this climate. I think some sort of increase should have been expected. However, an extra £150 to fork out (fees have gone from £250 to £400) - and just this is just for one child - would be too much for most families to pay out. I think a gradual increase would have been kinder on families. For a family with four children, that is £1600 for school bus fees - increased by £600.


* One operator providing all the council's services is not something I'm against and makes a lot of sense. Go Ahead's mistakes seem to only be a few teething issues, and probably will have already been ironed out.


* First are one of the unfortunate losers in this. They are also, for some passengers, the only people they can rely on. With commercial service passenger levels soaring around school opening/closing periods, First will potentially lose other passengers on journeys with lots of school children. We all have heard people in the bus station moaning about a lot of children on the bus, or saying "we'll go back earlier to dodge the school kids". A short term boom in child annual passes may be offset by longer damage to these individual journeys around school times.


* This is also an opportunity to First. I have no idea of the finances, but if they can register a reliable, cheaper, commercial alternate to the council's services - maybe for the next academic year, or next academic term - they may win back a lot of the passengers. Things could get "sticky" next summer if First choose to do this as if a commercial service is run alongside a tendered service, the tendered service must be withdrawn.


* In the short term, First need to introduce as many double deckers on these school journeys as possible. Duplicates may not be a financially-viable alternative to a problem they haven't caused - but as much capacity as possible needs to be brought in at as cheaper price as possible. An efficient First response will be very good PR, who appear to be fairly popular in the local press for struggling against the Weymouth roadworks for over a year.


* First have returned to Bournemouth with commercial school route 54. A sign of things to come or a one-off?


Interesting times ahead. Off topic, reliable sources claim Stagecoach's route 5 - Swindon - Salisbury - is a commercial competitive service to Go South Coast in the north.
Posted by bus80d at 12:09 2 comments:

My Sunday Lost Scene today is a view of Bude outstation in North Cornwall, photographed on 30th July 2006. 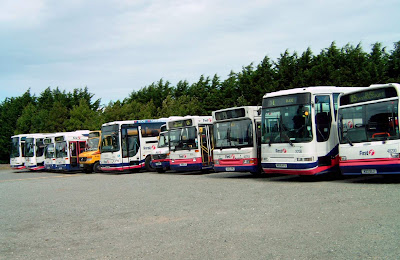 Bude was once a large First Western National/First Devon & Cornwall operating centre. Pre-2002, First Western National operated into Bude on the 122/124 from Boscastle, Tintagel and Newquay, the X3 and X4 from Truro, the X76 from Plymouth, and more. The network was then cut back a lot - Western Greyhound took over the 122/124 and more - but the allocation for Bude was still quite substantial in 2006. Routes operated from the depot were:
Pictured from left to right:
None of the above buses are in service with First Devon & Cornwall today on route work. Coaches 20108 and 20412 are still in service with the company, as is 20145 but it is withdrawn with accident damage.
Posted by bus80d at 16:11 No comments:

Here is a quick update from Romsey - my local Wilts & Dorset outstation, with frequent BlueStar and Stagecoach services also... 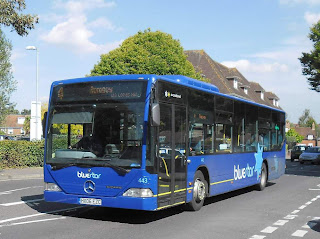 First up, here is BlueStar's regular offering on route 4. Any 6 of the 10 "06" registered Citaros (441-50) can usually be found on route 4, which interworks with route 12 in Southampton. Sometimes you get the odd ex-Southern Vectis Citaro on the route and occasionally even a DAF SB120/Optare Spectra that has escaped from the Southampton - Lymington route for today. Alas, yesterday was normal operation - here is 443 (HX06EZC). 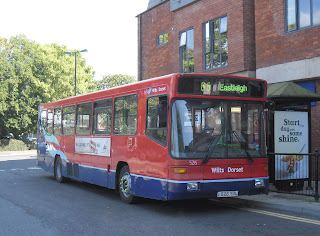 The most significant change since my last visit is that the Optare Deltas are more or less gone! Romsey was the final operational centre for the last 3 Deltas, which were usually found on the Salisbury - Romsey - Eastleigh routes. Replaced by Volvo B10Bs of the same age, here is former Solent Blue Line 526 (L526YDL). 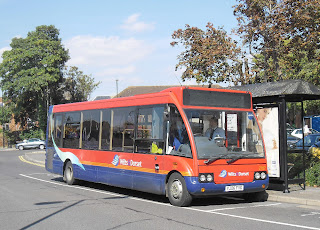 Salisbury's northern Solos are increasingly escaping south into Hampshire - 2707 (YJ06FYD) is one of a number of Solos acquired by Wilts & Dorset from the Meteor P&R contracts at Southampton Airport, that are usually found on the routes north of Salisbury. 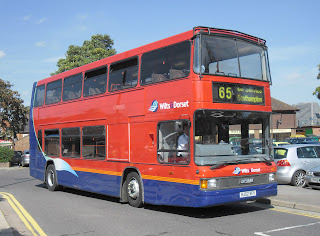 I don't think any buses remaining in service carry the Wilts & Dorset deregulation (stripes) livery. It has been reported that the final step entry Spectra - 3127 - has received the livery, and the final Delta - 3503 - has been placed into reserve/withdrawn at Salisbury. All of the remaining low floor Spectras have now received the livery - here is 3182 (HJ52VFY) looking fantastic as it gleams in the September sunshine. Following the changes in Salisbury earlier this year to create the X5 (Salisbury - Swindon), low floor Spectra sightings in Romsey have been rarer so I was quite lucky to capture 3182 yesterday. 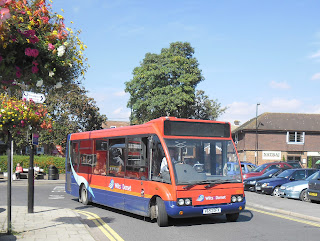 One of Wilts & Dorset's native Solos tends to escape to Romsey per day - yesterday was the turn of 2653 (V652DFX). It tends to operate morning circular routes before heading back to Salisbury on an afternoon route 34, which it is doing when pictured. 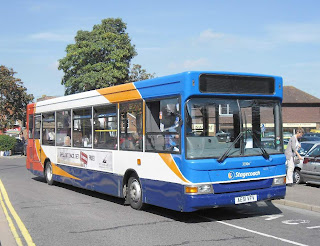 Moving onto Stagecoach, and here is recently acquired Dennis Dart SPD 33306 (AE51VFV). 4 Darts of different sizes have been acquired from Cavalier, and Winchester's three will move to Swindon shortly according to sources on GSC forum. 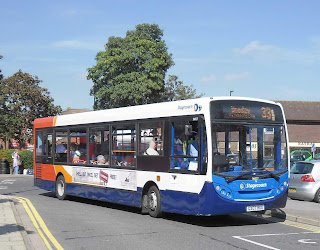 Finally, Winchester's only unbranded Enviro200 - 36027 (GX07HUU) - seems to be the regular bus on the Romsey town circulars, or at least whenever I visit the town it does. As far as I understand, a route 66 from Winchester arrives, does 2 hours worth of circuits on the Romsey town route 32s and 33s, before heading back to Winchester on the 66. This was the case a few years ago - I'm not sure if this still applies.


Romsey also still is one of the mainland homes of the former Southern Vectis Wilts & Dorset Olympians - I saw 725 and 749 yesterday but unfortunately they were camera shy, and both photos came out poorly. Ah well...


Finally, click here to read my report from Romsey of 11 months ago.

Just a very quick thank you for your continuing support - last month was the best month for audience views in it's history, with 6289 throughout August. The Weymouth posts were particularly popular, as was my older story about Wilts & Dorset's X5. News just in is that Stagecoach Swindon & District have registered a route 5 between Swindon and Salisbury - we are not sure yet what the actual details of the route are - as an enthusiast, I naturally hope for some competition and a new operator regularly working into Salisbury. Will have to wait and see on that one.


Anyway, back to the stats - Plymothian Transit (2640 - highest overall) and Omnibuses (283 - highest last month) are still my top referrers - thank you to both blog owners for your support.


Looking ahead, the post count will be down but I will make sure it doesn't tail off like it did in early summer. I will probably post twice a week plus my Sunday scene - I will try to do more but we'll have to see.