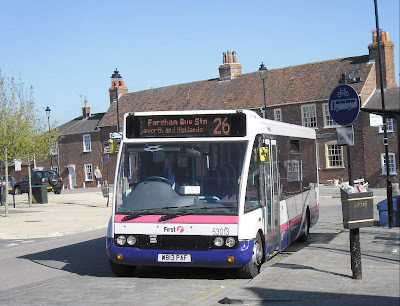 First Hants & Dorset have lost the contract to operate a route between Hamble and Hedge End, with the service passing to Brijan tomorrow. Yesterday was the last day of the route 26 extension to Hamble, which saw 4 Solos brought in from First Devon & Cornwall to reflect the improvements to the service. 53013 (W813PAF) is one of those Solos, which is pictured standing in Hamble on one of the last 26s yesterday. 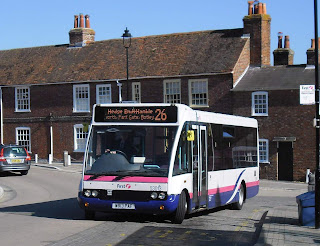 Brijan are taking over the route, and operating it as a loop from Hedge End. It will depart Hedge End, travel to Hamble via Lowford, then onto Butlocks Heath, Netley and then returning to Hedge End via Lowford.
The route change sees First Hants & Dorset's Hoeford depot lose Hamble from the network. It has only been part of the network for a very short amount of of time - Hamble was last operated to from Hoeford in People's Provincial days. There is also no longer a direct link by bus from Hamble - Fareham, but one would think this hasn't inconvenienced too many passengers as the route needs to be tendered. Maybe a direct route - such as route 57 extending from Warsash via Sarisbury Green, Lowford, and down to Hamble, would be the most likely profitable route.
It will be interesting to see what Brijan use on the route tomorrow!
Posted by bus80d at 12:00