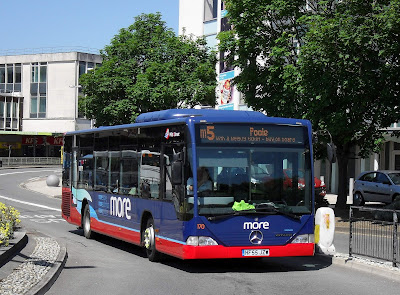 Two years ago there were two more More routes in Poole and Bournemouth. Two years ago, a sizeable fleet of More branded Mercedes-Benz Citaros operated the m5 and m6. Today, the bus has moved on, the livery is obsolete, and the routes have changed.

HF55JZW is now numbered 2420 from the recent Go South Coast re-fleet numbering movement. The bus is also now touring the streets of Southampton, operating with sister company BlueStar. The Citaros were moved on in 2011 as More was rebranded. The m5 and m6 lost their More status and are now operated by any odd bus at W&D Poole (they tend to be the preserve of Bomo Uni Scanias when they are not in use on uni routes). More itself has also been rebranded, now solely operated by Volvo B7RLEs in a lighter shade of blue. Poole itself is now down to the last few Citaros as Southampton's route 18 is being upgraded.

It is strange how such a familiar scene is now consigned to the history books.
Posted by bus80d at 20:54