The latest in my line of Norfolk posts now - this time from the seaside town of Cromer. 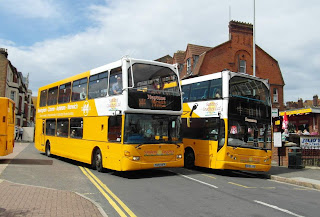 Cromer is the largest town on the north-east Norfolk coast, and is famous for its pier, narrow streets, cliffs and the beach below. The buses also share the variety of the town, with two main operators- Sanders Coaches and Norfolk Green. Sanders operate the majority of the bus services in the town. The most frequent is the trunk route between Norwich and Sheringham - the 44, 44A and X44. The routes usually see these high quality double deckers, offering great views and a quality ride to passengers. Former Reading Buses Scania Omnidekka YN54AFV "Neptune" is pictured along tri-axle Volvo B9TL OU05AVB "Sansom". 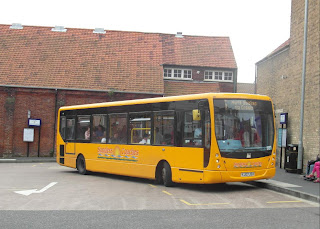 Sanders have filled in on the key services since the withdrawal of First Eastern Counties. A First f sign still adorns the former Eastern Counties Enquiry Office in the centre of Cromer bus station - now long redundant. Some of the newest buses on the East Coast are these former Arriva VDL SB120/Plaxton Centros - I counted at least 3 in service with Sanders. This is 208 (YJ07JSX), heading for North Walsham. 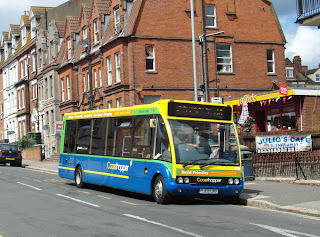 The other main operator into Cromer is Norfolk Green. The company operate the Coasthopper routes, connecting, on some journeys Norwich with Kings Lynn, via many towns and villages along the coast. Optare Solos are predominantly used, such as 309 (YJ09LBG). 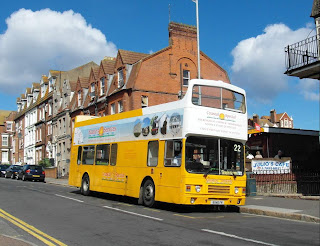 5 days a week, Cromer and Sheringham are connected by tourist route 22. The route sees former Lothian E300MSG, or 6546FN out in action. The route doesn't operate Mondays or Fridays, if you're wondering. 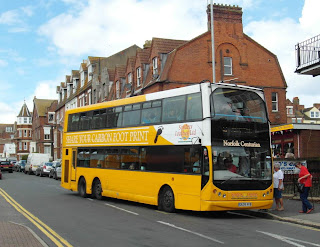 These are really mammoth buses - tri-axle 103 (OU05KKB) here, or Norfolk Centurion. These buses have coach seats and even have tables on some seats at the rear. They are used on the 44/44A/X44 from Sheringham to Norwich. 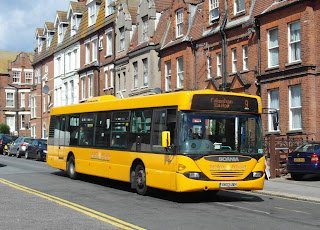 A fleet of 9 Scania Omnicitys is used around Cromer, predominantly on routes 4, 5 and 9, sometimes slipping onto the 44 or 45. The 4, 5 and 9 are an interesting set of routes. 9s from Fakenhams become 4s at Cromer, heading for North Walsham, where 5s double the frequency from Holt - North Walsham. This means there are two buses an hour (at least) from Holt - North Walsham, via Sheringham and Cromer. Combined with the Coasthopper and 44, there are at least 6 buses an hour between Sheringham and Cromer. Here is former Menzies Scania Omnicity 306 (YN03UWH). 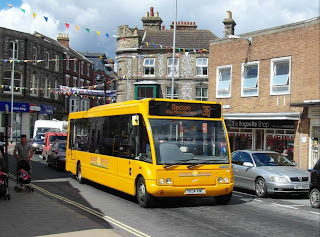 Three long Solos are used by Sanders on a variety of lower-capacity routes around Cromer. This is 2112 (YK04KWC), heading through Cromer on a Sunday route 36 for Bacton. 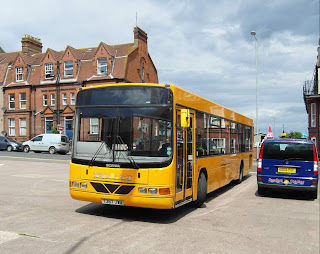 I was surprised when this bus turned up - it wasn't on my fleet list and I had no idea what it was. This is Sanders' 312 (T367JWA), parked in Cromer bus station. I presume it is a Scania something or other, and I know it was acquired from Dawsons Rentals as a dealer. Any previous info would be appreciated! 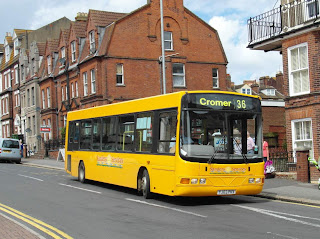 Penultimately, here is DAF YJ03PKV new to Pullmann of Swansea, where it used to operate the Gower routes. It now operates with Sanders, and is seen here arriving from Stalham on route 36. 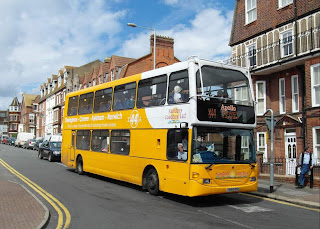 Finally, being the Southern England Bus Scene blog, I thought I'd better finish with a Southern bus. Another former Reading Scania Omnidekka - this time Apollo or fleet number 112 (YN54AFU), departing the Cardogan road bus stop. Cardogan Road is great for the sun any time up until about 1pm, but from about 2.30pm great shots are possible out to sea along the seafront. Unfortunately, due to other commitments, I wasn't able to take shots in Cromer at this time.

In summary, I found Cromer an excellent place for buses. The traffic can be annoying, but the departures were usually prompt and the variety from Sanders kept things interesting. Both Sanders and Norfolk Green presentation was excellent. I would certainly recommend an hour or two in Cromer, if your around in the area.

Thanks for reading - if you haven't seen the first Norfolk post, click here.
Posted by bus80d at 11:00