Lymington depot of Wilts & Dorset is a hive of activity at present - more so than any in previous summer. Not only are they operating their usual number of routes, buses are provided for the Blue New Forest tour, the 112 to Hythe has been tripled in frequency for the summer(ish), and the Olympians are getting a good work out, earning their stay late into their service life. 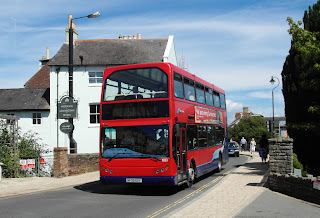 As discussed in previous posts, the X1 and X2 are half hourly services connecting Lymington with Bournemouth. In 2005, the routes were upgraded with convertible open top Volvo B7TLs, such as 1830 (HF05GGY), as illustrated left. However, from the original batch of nine buses, five have been moved elsewhere for use on the New Forest Tours or simply to other depots. Thus, only four remain at present. Therefore, the X1 and X2 is throwing up some rather peculiar allocations at present. 1830 is pictured coming across one of the bridges in Christchurch, heading along Castle Street. 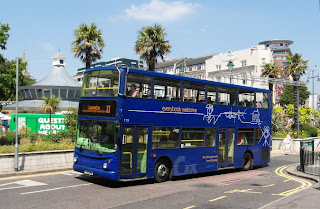 For the month of July, 6 Dennis Tridents were loaned in to Wilts & Dorset (4 buses) and BlueStar (2 buses). Since the schools have gone back, they have all returned to Oxford and are no longer on the South Coast. Here is City of Oxford's 113 (T113OBW), pictured heading for Lymington along Gervis Place back on 13th July. 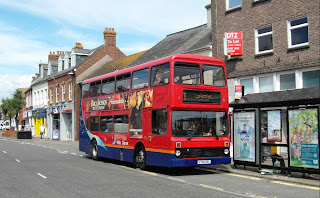 With these gone, the former Southern Vectis Olympians, now freed from school work, rule the roost over the remaining allocations on the X1 and X2. Here's 4740 (K740ODL), heading for Lymington through Christchurch yesterday afternoon. 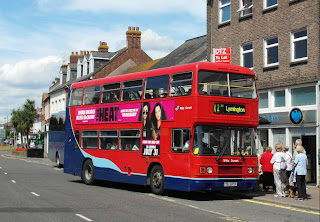 It isn't just the Northern Counties bodied Olympians either - this all Leyland "TIL-ley" was out on the X2 also. 4713 (TIL6713) was new as F713WDL to Southern Vectis. These are even sneaking onto the 6 up to Southampton on occasion, but the three BlueStar livered Spectras and associated Solos seem to do the work most of the time. 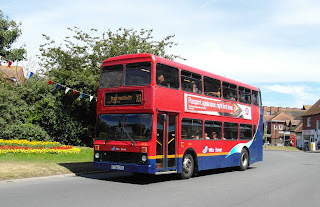 Three Olympians were out on the X1 and X2 yesterday, and 4736 (K736ODL) completes that hat-trick. She is pictured heading for Bournemouth through Christchurch.

This arrangement is expected by enthusiasts to last for the summer, although nothing has been confirmed by the company itself. Should complaints mount up, I can see them drafting in a few PVLs that are spare. Therefore, should anyone want to have a realistic and likely chance to get these buses in service work again, I suggest you get yourself down to Lymington over the summer - the earlier the better. Don't forget on Wednesdays there is the extra 118 to Ringwood market.
Posted by bus80d at 16:17