Today's Sunday Lost Scenes comes from Lymington back in 2008. I'm sure I've used this one on posts before, but I thought it was very apt for events at present... 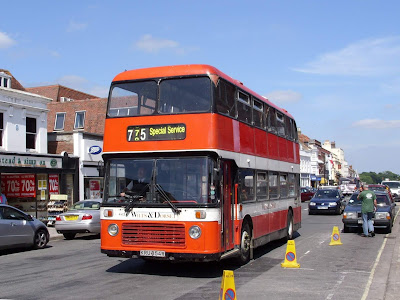 With Wilts & Dorset's Lymington's present use of elderly Leyland Olympians on the X1 and X2 at present, I thought this week we'd return to 2008, which was the last year of the Lymington VR. This photo is the last ever Bristol VR I photographed in service (albeit it is operating a strategic empty bus movement!), and was the only one of Lymington's VRs I ever got a decent photo of.

This VR photo is sort of symbolic of the problem enthusiasts have in photographing Lymington's Olympians. Usually, they are strictly used on the 118 Wednesdays only service to Ringwood, and the Brockenhurst school contracts. They are a relative nightmare to photograph- a situation that will return when the New Forest Tours end, or the rumoured Scania Omnicitys move to Ringwood. This is why the opportunity to photograph them on X1 and X2 is important for anyone who would like to grab some more, final photos. Apparently two Spectras have been moved to Ringwood for use on the X1/X2, but this still leaves at least one allocation on the PVR 7 route that will be an Olympian. That's assuming all Spectras and Volvo B7TLs are fit and healthy.

Now this VR was made before I was born, so bare with me on the technical details. A KRU***W registration means this bus was new between Aug 1980 and July 1981, meaning that at the time of this shot, the bus was about 28 years old. F707RDL has been used on the X1, X2 and 6 in the past week - new in 1989 I believe. Therefore, the bus is 24 years old. As such, the present Lymington Olympians have got a little bit further to go before they can be equated with using Lymington's VRs on the same services.
Posted by bus80d at 12:33