An enjoyable day out on the South Coast

What an enjoyable day out on the South Coast yesterday was. Today's post gives some of the highlights of the 2013 Stokes Bay rally, organised by the Provincial Society and supported by large numbers of bus owners, stall holders and visitors. The sun came out from behind the clouds more and more as the day went on, and it was a really lovely day. Just one quick piece of housekeeping - to reminisce over the last rally in 2011, please click here. 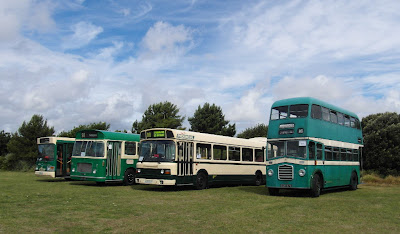 I'll start with a line up of preserved Provincial buses, as the rally was started in 2003 originally to support 125 years of the company. From left to right are unique ACE Cougar H523CTR, Bristol RE ECG112K, Leyland National A301KJT, and Guy Arab II EOR875. There are a wide selection of Provincial vehicles preserved and I've always wondered why - especially when some former fleets do not have any buses preserved. This preservation of history is perhaps why my local fleet is so fascinating - the history seems to effortlessly live on into the present day. 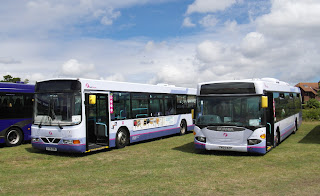 Two companies the rally couldn't have happened without now - First Hampshire & Dorset are the first. They supplied eight buses from Southampton and Hoeford depots, and two of them are illustrated here - former Sheffield Volvo B10BLE 66196 (S796RWG) alongside native Scania Omnicity 65017 (YN54NZP). I do think the Scania would look far more attractive if the front was finished though - the new First livery really sits well on the Scania and has the potential to look even better - this just looks rather wierd. If a FHD manager is reading this, please at least paint one up round the front to see what it looks like? I trust you will be convinced that a full frontal repaint is the right way forward... 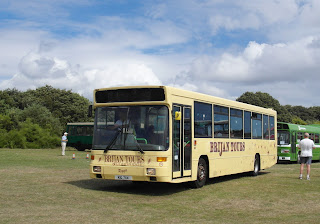 Secondly, Brijan Tours, who also sent a large number of buses, including three Darts and this Volvo B10M - affectionately known as Reggie - and formerly N502HWY. Without the support of Brijan, the rally would not be able to take place, so thank you very much - it is very much appreciated! 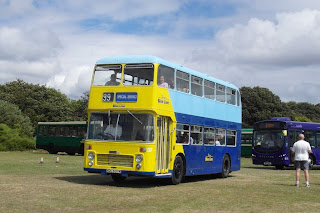 The local southern fleets were well supported, with various buses from the Go Ahead South fleets or their previous incarnations. Here is preserved Solent Blue Line VR NDL637M heading out of Stokes Bay on the cavalcade. 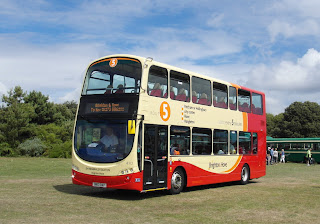 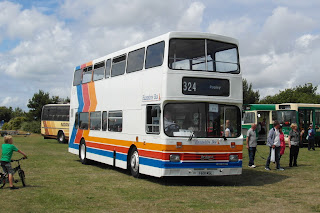 Stagecoach were well supported with a Volvo B10M and this, an early Leyland Olympian new to Hampshire Bus. F601MSL is still owned by Stagecoach, and is one of an ever increasing number of preserved buses owned and operated by Stagecoach internally - an excellent initiative which recognises the service these buses have given in the history of the company. Still numbered 14951 in the Stagecoach fleet, here she enters the rally site having completed one of the free tours around the south coast. 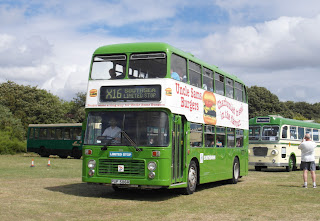 Preserved Southdown buses also featured frequently at the rally - here is PUF586R with the destination set for the old X16 express service to Southsea. She is pictured heading out on the cavalcade. 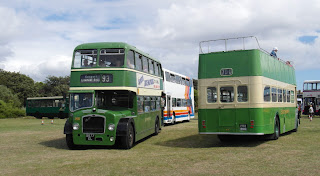 Sticking with Southdown and also veering slightly left to Hants & Dorset, here are two well known and loved buses passing each other at the entrance to the Stokes Bay rally site. Hants & Dorset 5677EL heads out onto the cavalcade, while Southdown PRX189B deposits passengers from one of the free tours. The dedication shown by the owners of all the preserved buses must be applauded as all buses were turned out looking spotless. In addition, without the support of these preservationists, rallies like Stokes Bay would not take place, so it is much appreciated! 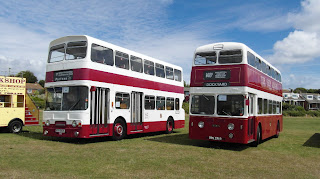 Two further glorious buses - this time from Portsmouth. Atlantean VTP262L is blinded up for route 17, alongside BBK236B on the 148B route. Suddenly, you can see the benefits of First's simple network in Portsmouth today! 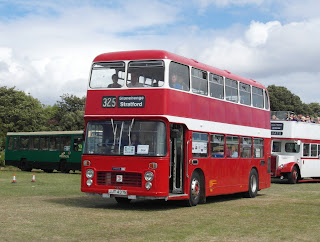 Finally, this is preserved Wilts & Dorset Bristol VR JJT437N. This is the first time that I've seen this bus, and I was very excited to see it pull into the rally site in the morning. It is pictured heading out of the rally site onto the cavalcade.


Yesterday's rally was well attended with visitors, buses and traders. It seemed all the stronger for missing out a year earlier, due to the consistent and persistent heavy rain suffered in 2012. Yesterday, the sun was out, the buses were rolling, and it was almost like it had never been away. Thank you to all of those individuals - the Provincial Society, officials at First & Brijan, preservationists, traders and enthusiasts themselves - who made the day so successful and enjoyable. Here's to next year!
Posted by bus80d at 10:43