Once upon a time, these were an every day sight in Portsmouth... 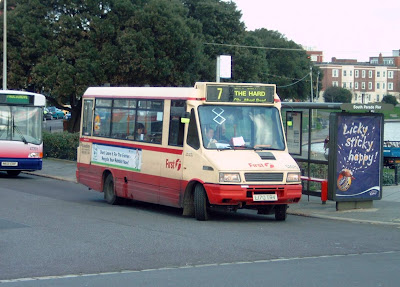 The Iveco TurboDaily - bouncy, vibrating, rattly buses, but a type of bus that I think you'll find nearly every enthusiast growing up in the People's Provincial area will have a small soft spot for. L170TRV was the last one I needed on camera from the batch that was in service at the time in February 2005, and I was rather chuffed to catch it by luck at Southsea's canoe lake, just up from South Parade Pier. 2005 saw the slow beginning of the end of the Iveco, with mass withdrawals in 2006, before the final buses went in 2007.

These Ivecos, new between 1993 and 1995, and then supplemented by a predominantly Mellor bodied batch acquired from Blue Admiral with First's take over in 1996, dominated the Portsmouth bus scene for over a decade. With the withdrawal of most of the former Blue Admiral buses, combined with the shift of several Iveco-operated routes to bigger buses, the former People's Provincial Hoeford based buses were shifted over to Hilsea. They were allocated to high frequency routes, such as the 3, then at five buses an hour between Paulsgrove and Southsea, or the 6, 13 and 14, all Portsmouth city services with six buses an hour. Long after the last regular Iveco service disappeared from Hoeford, Ivecos still ran all the way through Fareham to Warsash on the 57.

With Portsmouth routes receiving 37 Streetlites later this year, it is likely the entire network will be operated by large low floor buses. The smallest bus found will be a Solo. The goal will have finally been achieved - large, more comfortable low floor buses at lower frequencies - set in motion with the beginning of the end of the Iveco, back in 2005.
Posted by bus80d at 10:51