Stagecoach now rule the roost in North Devon following the closure of First's Barnstaple depot, and now they are cementing that advantage, with a fleet of brand new Scanias... The North Devon Wave is the brand Stagecoach introduced in 2010 for the main North Devon route - connecting Barnstaple to Bideford, and onwards to the towns of Westward Ho! and Appledore. First used to operate these as the Atlantic Goldline and Atlantic Connection, amongst other brandings, but it is Stagecoach's version that now operates the main corridor in North Devon. A large batch of Scania N230UD/Enviro400s have been placed into service, with 15887 (WA13GDF), or 'Poppy', indicative of the batch. 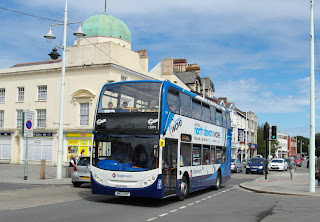 The 22 North Devon Wave Scanias have been introduced, upgrading the corridor beyond Barnstaple, up to Ilfracombe too. The two routes combine on the Barnstaple - Bideford corridor, giving 6 buses per hour - three via East-the-Water and three via Instow. 15894 (WA13GDY) heads along Bideford Quay for Braunton on the 21. 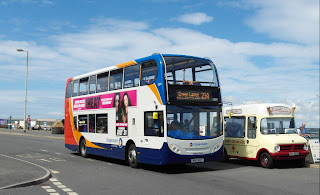 A number of unbranded buses have also entered service alongside the Wavers- what seems to be a standard policy where Stagecoach introduces a brand new fleet of buses. 15899 (WA13GEY) is named 'Abbie Rose' - I believe the names the buses carry are the names of bus drivers' children who won a competition. 15899 is pictured heading along the quay at Appledore, past a particularly attractive ice cream van. 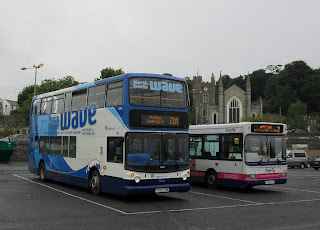 The old order were former Stagecoach Oxford Transbus and ADL Tridents. These buses have literally run First off of the roads in North Devon - the old order pictured to the right. On 9th August 2010, Stagecoach's 18394 (KX55TLN) is pictured next to First's 42449 (R449CCV) - a bus now in service in Weymouth. An image of the Dart was perhaps a little unfair on First - most journeys were operated by Tridents (new in 2000 or 2005), with a few ex-London Tridents chucked in too. However, First had recently upped the route to a 10-minute frequency and they didn't have enough Tridents to cover all the workings - hence the drafting in of a couple of Darts each day. 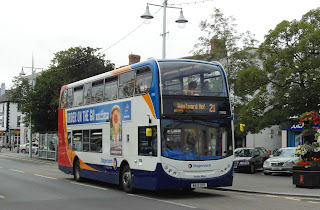 A final view of another unbranded Scania - this time 15900 (WA13GFE). 'India May' is pictured heading along Bideford Quay for Westward Ho! on the 21. These are certainly impressive buses, and despite being a rather common (boring?) design for the enthusiast, the buses still ooze class and style with their attractive curves, clever use of glass and expected high-standards of presentation from Stagecoach.

To view the timetable, please click here. The Appledore photos were taken from about 1200 until about 1430 - although as the buses turn in the car park the sun is perfect whenever you visit. Nearside shots at Bideford possible AM - don't visit early afternoon as the sun will be too head on. Offside shots possible PM, and Bideford town's bridge is excellent for photos too, if a little tricky with the traffic.
Posted by bus80d at 10:54