Godshill is a picturesque village on the Isle of Wight. South of the Island's capital, Newport, Godshill is a tourist honey pot in the summer regularly seeing thousands of visitors. I myself saw three coaches unload holiday makers, and this was May. Godshill also sees 8 buses per hour from Southern Vectis. The 2 operates half hourly between Newport and Shanklin (and on to Sandown and Ryde), and the 3 operates half hourly between Newport and Ventnor (again, onto Shanklin, Sandown and Ryde). All buses are double deckers. This post is a comparison between Godshill on Saturday, in 2012, and my last visit to Godshill, back in 2005. 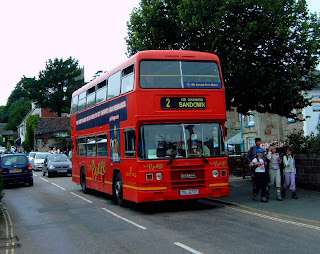 In 2005, Godshill was also served by routes 2 and 3, but back then these were the two Route Rouge routes. The routes were operated in the main by Leyland Olympians of F, G and H registrations. Route 2 connected Cowes with Newport, Godshill, Shanklin and Sandown, where route 3 connected Cowes with Newport, Godshill and Ventnor, if I remember correctly. Here is 717 (TIL6717) heading through Godshill back on the 4th August 2005. 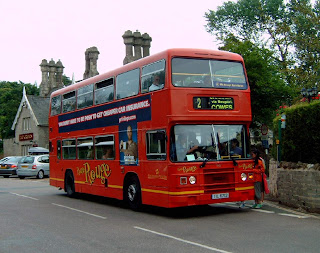 The once large Leyland Olympian fleet has now all moved onto Wilts & Dorset and Damory on the mainland. 710 was numerically the first example on the island, although sisters 706-9 were with Solent Blue Line at the time. 710 (TIL6710) heads for Cowes on route 2. To reach Cowes from Godshill, you now need to change at Newport onto an MPD and route 1. 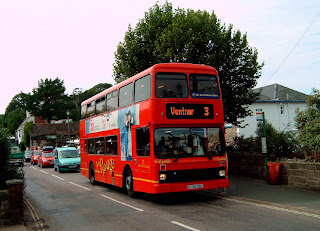 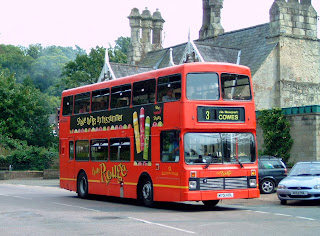 Two Volvo Olympians also made it into Route Rouge livery and were often found on routes 2 and 3. Here is 751 (M751HDL), pausing to collect passengers for Newport and Cowes. On 4th August 2005, I did not find any blue livered Island Explorer buses in Godshill, but this was not uncommon. 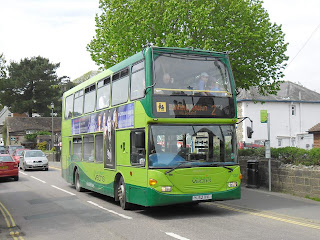 Fast forward 7 years and, although the place hasn't really changed, the buses most certainly have. Low floor, modern, green double deckers are now the main allocation. This bus is Scania Omnidekka 1051 (YU52XVL), new to Metrobus and transferred to Southern Vectis in 2010. 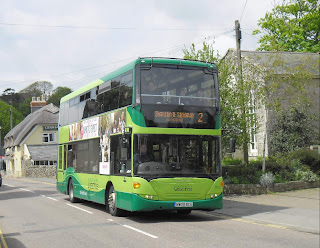 Throughout 2008 and 2009, Southern Vectis received a large delivery of Scania Omnicity double deckers, which saw off all of the Leyland and Volvo Olympians. State of the art 1150 (HW09BCU) powers through Godshill on a 2 for Shanklin and Sandown. 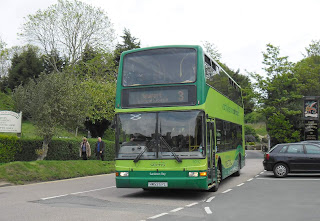 The Volvo B7TLs were around in 2005, but these were predominantly allocated to the Island Explorer routes. Renumbered twice since then, 1992 (HW52EPL) heads for Newport on route 2. 1992 was new to Southern Vectis as 101, but following the Go Ahead takeover, it became 191 and then 1992 this year. Route 2 now operates Newport - Godshill - Shanklin - Sandown - Ryde, and route 3 now operates along the same lines but also via Ventnor. 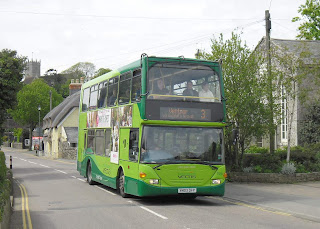 Another former Metrobus Omnidekka in Godshill, this time 1055 (YN03DFP). The green of the Southern Vectis livery certainly matches in with the green of the rural village.

For anyone heading over for a few days to the Island over the summer, I certainly recommend spending an hour in Godshill. 8 buses per hour in each direction, and if you visit either on a cloudy day or between 1230 and 1400 on a sunny day and you'll get them all.