On Saturday, Xelabus introduced their brand new open top route in Portsmouth. The X25 connects The Hard with Clarence Pier, the sealife museum and D-Day museum, South Parade Pier, the Royal Marines Museum and Eastney Caravan Park. The route is a carbon copy of First's former route 50 and 70, which they unfortunately withdrew in 2002. 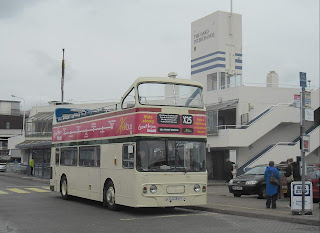 Leyland Atlantean GJZ9571 operates the X25, and is seen here at The Hard on the first Saturday. Atlanteans very much like this bus were once found all over Portsmouth, but these were inherited by Stagecoach before the company sold onto Blue Admiral. They didn't last long after that. 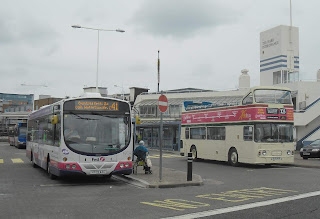 First in Portsmouth's finest at the moment stands next to the Atlantean in The Hard. It will be interesting to see how popular the X25 gets on a bright, sunny day later in summer. Loads were quiet on the first day for the departures that I observed. 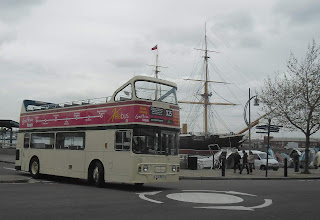 GJZ9571 stands alongside HMS Warrior in Portsmouth Hard as it negotiates the roundabout for Southsea. The livery seems a little confusing - the top red band could have done with being repainted green, and the pink is certainly noticeable. The Atlantean was previously in service down in Paignton.

For those interested in having a ride, the X25 is operated every Saturday, Sunday and Bank Holiday from now until 30th September, and Daily over the termly summer holidays.
Posted by bus80d at 11:00