Due to various reasons, I haven't posted my sightings or photographs from the newly introduced First in Portsmouth network yet. Today I will put this right, and bring observations of the new network around the Portsmouth region. 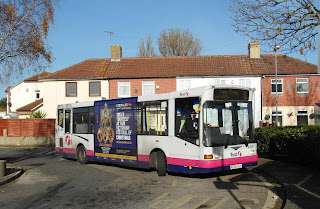 We'll start with route Zero. This brand new route connects Tipner with North End, Southsea, Eastney and Hilsea and vice versa. This route seems to be mainly in the hands of Mercedes-Benz Varios and Dennis Dart SLF/Marshalls. Former First London 41636 (R636VLX) does the honours here, pictured in the bus turning circle at Tipner. Tipner is set for a transformation over the next year. By spring 2014, Portsmouth City Council expect a new junction to be built at Tipner, serving a brand new purpose built Park & Ride site. As a result, new Park & Ride bus services would connect Tipner to the city centre. Furthermore, there have been many suggestions to connect route Zero to the QA Hospital. With the forthcoming service review, it will be interesting to see what happens to the Zero - I can't see it remaining the same in 18 months time. 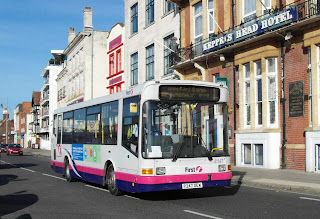 Next up, route 1. Route 1 is two circular routes operating every 10 minutes Monday-Saturday. It connects The Hard with Old Portsmouth, Palmerston Road, Southsea South Parade Pier, Eastney, Fratton and Portsmouth City Centre, and vice versa. Mon-Sat it seems to mainly see Scania Omnicity, although the odd Hilsea working is operated by Dennis Dart SLFs. Sundays sees Dennis Dart SLFs all the way though, which seem a bit poor for Portsmouth's premier city route. The oldest Dart SLF in the Portsmouth fleet - 41147 (P247OEW) - does the honours on the first Sunday of service. 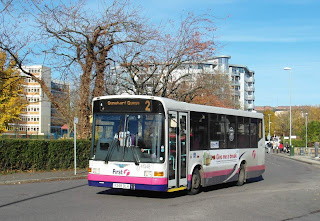 Route 2 is a joint Hoeford-Hilsea route that connects Paulsgrove with the QA Hospital, Cosham, Eastney, Portsmouth City Centre and The Hard. It operates every 10 minutes Mon-Sat, and has some interworkings with route 1. There seems to be a discrepancy between the quality of buses put on route 2 by each depot. Where Hoeford allocates Scania Omnicities, Hilsea seems to operate Dart SLFs on the route. However, I know First are addressing this in the medium term, as second-hand Volvo B7RLEs are in the process of being sourced from elsewhere. Former London Dart 41348 (V348DLH) does the honours here. 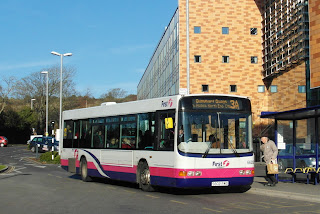 The new route 3 is an interesting new route. Route 3 principally operates at every 20 minutes between Fareham, Portchester, Paulsgrove, the QA Hospital, Cosham, North End, Portsmouth CC and The Hard. Route 3A interworks with this to provide an every 20minute service from The Hard - Paulsgrove, but then terminating at Portsdown Inn, which route 3 does not serve. However, one route 3A an hour continues from Portsdown Inn to Portchester, Linden Lea and Fareham. The route seems to be primarily operated by Volvo B10BLEs, although sometimes a Dart SLF or Omnicity may sneak onto the route. Here is a view of former First Sheffield 66202 (S802RWG) outside the QA Hospital's North Entrance.

Route X4 also serves Portsmouth as part of the Solent Ranger network, operating to Southampton every 20 minutes. Routes 5 and 6 are Fareham-Gosport routes which will be featured in the future. Routes 7, 8, X9, 12 and 22 - the other new Portsmouth routes - will be featured in Part 2. Thanks for reading.
Posted by bus80d at 11:00