My third and final entry from Poole - this time from Wilts & Dorset. Since my last visit, there haven't been many significant changes, although the Volvo B7TL double deckers have all received 2008 livery, and more More Volvo B7RLEs have received the new version of the branding. 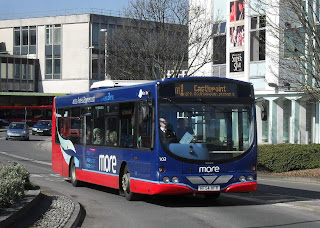 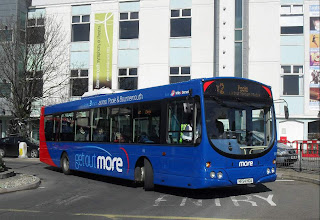 I may as well start with the more routes - the m1 and m2 operate up to every 3 minutes between Poole and Bournemouth, operated by a variety of Volvo B7RLE and Mercedes-Benz Citaro single deckers. The Volvo B7RLEs are receiving an updated version of the branding livery at the moment - here are images of 103 (HF54HFR) in the old livery, and 111 (HF54HGA) in the second image, painted in the lighter blue livery. I'm not sure which one I like most - I like the blue of the latest image, but I think I the original livery suits the Volvo B7RLE better, not that my opinion matters much. Sister to these two, 101, is on the Isle of Wight at the mo. 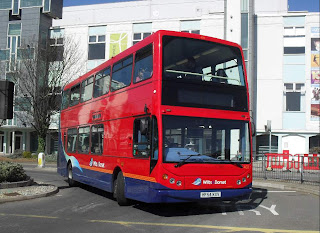 Wilts & Dorset operate four of their 11 Volvo B7TL double deckers from Poole depot. These are usually found on the X8, 14 and 16. 403 (HF54KXV) arrives in Poole bus station on a trip from Bournemouth. A further 7 operate from Lymington, mainly on routes X1 and X2 to Bournemouth. 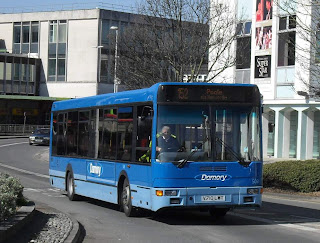 Damory operate a number of routes into Poole - the 152 is an hourly route operating to Rockley Park - transferred in recent years over from Wilts & Dorset. Former Marchwood Motorways DAF/Ikarus 508 (V710LWT) is pictured arriving in Poole. 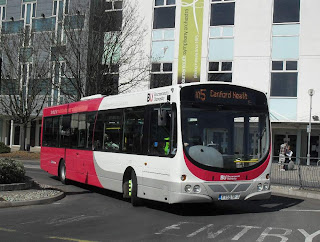 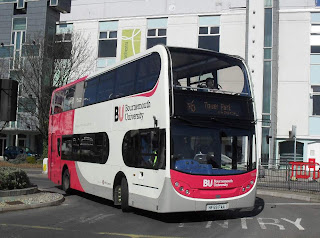 Bournemouth University routes do not operate on a Sunday, which mean that Wilts & Dorset acquire 7 very young buses that can be used on its normal network. Wilts & Dorset  operate a Scania L94UB/Wright single decker - the only one in the fleet. 2101 (YT59SFJ) is pictured on the m6, arriving in Poole with the destination already set for the m5. Wilts & Dorset operate 6 Scania N230UD/Enviro400 double deckers on the uni routes - here 1501 (HF59FAA) arrives in Poole on an m5 (the destination is already set for the next journey on the m6). 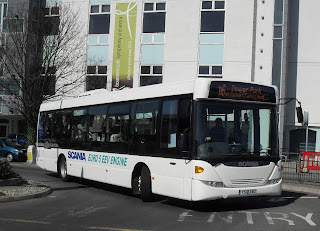 A Scania Omnicity single decker is on loan to Wilts & Dorset in Poole at the moment - whether on evaluation purposes or simply on loan covering vehicle absences I'm not sure. YS10XBO seems to be rigidly allocated to the more routes at the moment, and is pictured entering Poole bus station. 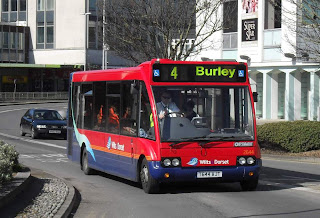 I couldn't post a series of Wilts & Dorset photos without including a Solo - here is 2644 (T644AJT) arriving in Poole on route 4. I like this photo as I've captured it with the bus apparently heading for Burley, near Ringwood, in the New Forest! The blind was changing as the photo was taken. 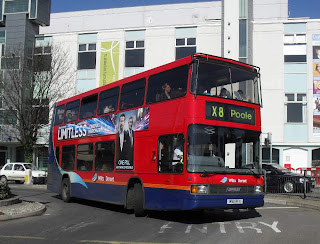 I still find it strange seeing these in the Wilts & Dorset 2008 livery - not sure why really as they are quite common since the X3 has moved to Scania Omnicity operation. With some rare bus spotter-friendly passengers upstairs, 3161 (W161RFX) arrives in Poole on an X8 from Blandford. 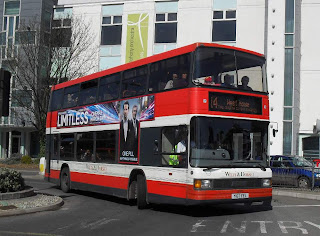 The only bus in the old livery that I saw on Saturday was 3167 (Y167FEL), pictured here arriving in Poole on route 14 from West Howe. The recently installed LED display means that this image looks rather odd (in my own opinion). 3167 can't be too far away from the paintshop now - I don't expect many (any?) buses to be left in this livery when we reach 2012. 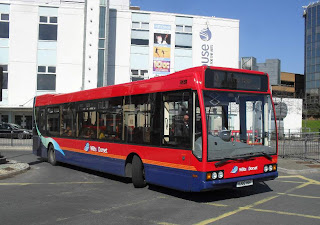 To finish off, here is one of the sizeable batch of Optare Excel in use in Poole. The Excels predominantly on route 9, although they are frequently seen on routes m5 and m6, especially on weekdays. 3611 (HJ02WDF) was one of the Excels originally bought for the X4 from Salisbury to Bath if I remember correctly - here it is pictured entering Poole bus station.
Thanks for viewing my Poole postings - all comments welcome. If fotopic does come back I'll stick all of my photos (around 160) online - if it doesn't come back they may be a little longer!
Posted by bus80d at 21:18