A Tributary of the Rivers

As discussed on a previous blog entry, Stagecoach in Hampshire operate the Sunday route A between Eastleigh and Hedge End. It always offers a rare photo opportunity - and Stagecoach buses in regular service well away from their usual routes. 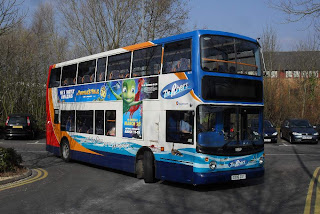 Following a tip off from regular commentor "Dennis Dash", I popped up to Hedge End superstores on Sunday to photograph Rivers branded Trident 18519 (GX06DXT) operating on the A. 18519 is one of a number of former Coastliner 700 Tridents usually operating Winchester based country routes, such as the 76/86 to Andover and Basingstoke, the X64/X65 to Alton and Guildford, and my local, the 69 to Fareham. 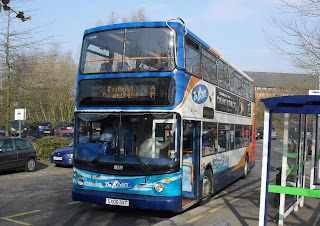 Now, I like to think that 18519 technically isn't off its branded routes, as the A does run alongside the River Itchen in Mansbridge for a part of its journey. Therefore you are still going with the flow across Hampshire along the Rivers! This is the first time I've managed to photograph one of these Tridents branded up - due to a lack of effort rather than not being able to find one. I do think the branding is slightly unnecessary as it doesn't really give much information regarding the routes, and is used across such a wide area - Hampshire, Surrey and Wiltshire (when these go wandering on the Activ8 route from Andover). However, its just something a bit different and friendly, and makes the bus seem a little more special.
Related Posts:
Stagecoach in Eastleigh
Posted by bus80d at 16:00