In my continuing quest to photograph buses in the towns of Southern Hampshire in, today I spent an hour in Ringwood. Ringwood is home to a Wilts & Dorset bus depot, also seeing Thompson's buses and weekday Damory service, along with Greyhound and NatEx coach services. 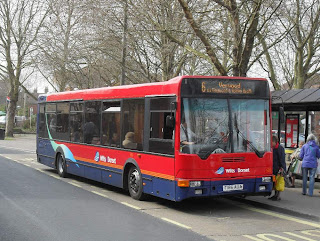 My number one target today was former Marchwood Motorways DAF/Ikarus 506 (T186AUA). 506 is usually allocated on the Bournemouth to Verwood route 36, and was again found on this route today. I featured sister 508 on this blog last week. 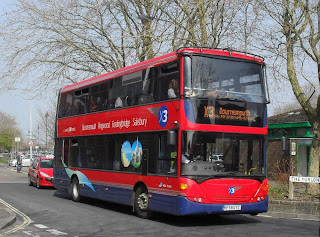 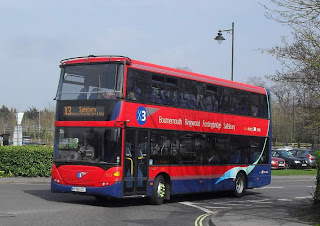 The main route in Ringwood is Wilts & Dorset's X3, which connects Bournemouth with Salisbury at a frequency of every 30 minutes during weekdays and Saturdays. The X3 is usually operated by Scania Omnicity double deckers, as illustrated here. Firstly, we see a view of 1120 (HF58GYZ) heading into Meeting House Lane heading for Bournemouth on the X3. In the second photo, 1123 (HF58GZC) is pictured turning into The Furlong at Ringwood, arriving from Bournemouth around lunchtime. These vehicles don't often see service on other routes, although unbranded 1118 sometimes operates the 36. 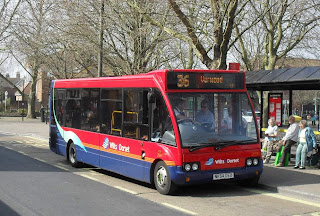 Three Solos are operated by Ringwood depot - native 2615 and two former Go North East examples - one of which is 2696 (NK54DEU). The Solos operate a mixture of routes 38 (to Ferndown) or 175/6 (to Christchurch), but sometimes one deputises for an Excel on the 36 - such as 2696 is doing in this photo. It is pictured loading passengers at Meeting House Lane. 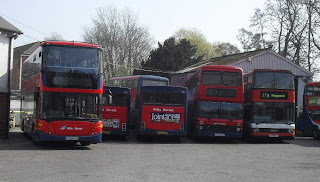 Ringwood depot operates a lot of local school and college services, and therefore has an surprising amount of buses allocated to the depot for the ordinary services it operates. I counted 6 Leyland Olympians, and 3127 (L127ELJ), the last step-entry Spectra outside of Salisbury, is also allocated to Ringwood. In this view are also two Volvo B10Bs new to Solent Blue Line - I'm not sure what these are used for although I think it is specific school duties as well. The Leyland Olympians may sometimes be used on the 175 or 176, but this is also rare. 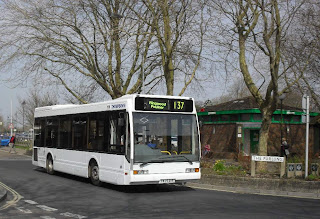