I got back over to the island today for the second time this year - nothing has really changed since my January visit, apart from W&D now have two Solos and an on-loan Volvo B7RLE from W&D. More Solos are due/being prepared for service - I'm not sure for what purpose but there will be a need for 5 of them in the coming months. Anyway, on with today... 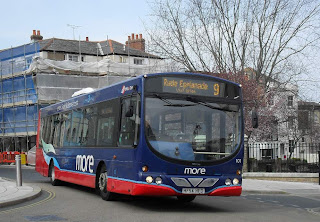 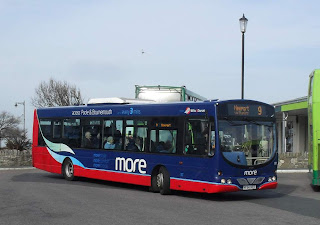 I'll start with the loanee - Wilts & Dorset 101 (HF54HFO) is in service on the island at the moment, covering a loanee Scania which in turn is covering the Scania Omnicity double deckers as they return to the manufacturer for warantee work (I think that's it anyway). 101 is primarily allocated to route 5, but today I managed to catch it on route 9, connecting Ryde and Newport. My first photo show 101 arriving in Ryde from Newport at St Thomas' Square, and the second image illustrates 101 departing Ryde bus station on a return to Newport. 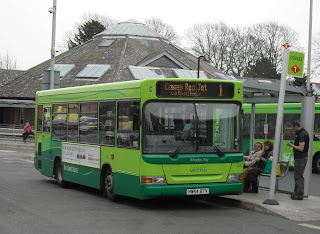 I spent about half an hour in Newport bus station, and managed to grab some photos of the MPDs. There are now only a few MPDs left on the island - primarily allocated to route 1 (Cowes - Newport), but when available one also operates route 38 (to Carisbrooke). 302 (HW54BTV) is pictured on the stand in Newport bus station. 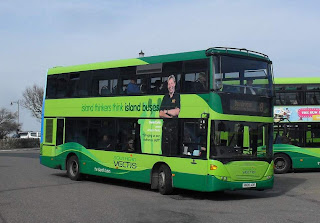 The main buses in service on the island are these Scania Omnicities - here is 1102 (HW08AOR) departing Ryde bus station for Bembridge on route 8. 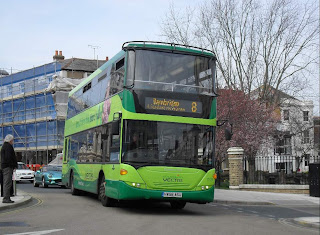 The 8 and 37 interwork in Ryde. Here is Scania Omncity 1109 (HW58ASU) arriving in Ryde on a 37 - with the destination already set to route 8 for its onward trip. Pictured in St Thomas' Square. 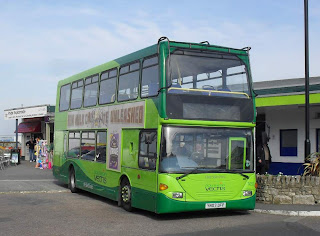 5 former Metrobus Scania Omnidekkas are in use on the island. They are allocated to the school unit at the moment (seeing operational action on specific bus service lines and school services), and a fitter/mechanic drove 1055 (YN03DFP) up to the bus station today. Here is 1055 parked out of service. 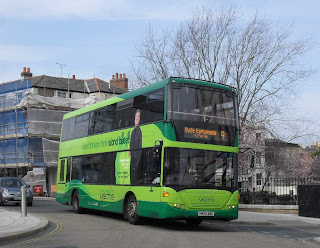 Finally for today, here is another Scania Omnicity- this time 1142 (HW09BBU) pictured arriving in Ryde's St Thomas' Square on route 9 today. Thanks for viewing - I will upload all of these photos and more to my fotopic site when it starts working again - hopefully sooner rather than later...
﻿
Posted by bus80d at 20:51