It is a very strange feeling being an enthusiast in First Hampshire land at the moment. For years we have had cast-offs for transfers, a (in my personal view) lack of investment apart from where contracts are concerned (such as the Hamble 16, Portsmouth 40, Zip 41), and a stagnant route structure which, if there are any changes, were only usually cutbacks.

Now First Hampshire has been thrown into the spotlight. In the last 30 days, all of the following have happened:
First Hampshire has never been so interesting. The management deserve great credit in reviving the First brand and leading the way in First. They have been supportive to passengers and enthusiasts, and innovative in designing new networks. Purely from observations, but I have never seen the 57, 72 and 80 as busy as the new 4 and X4 are. I see the Southampton network less, so can't comment, but reports from elsewhere suggest loadings are good and passengers are more or less happy. 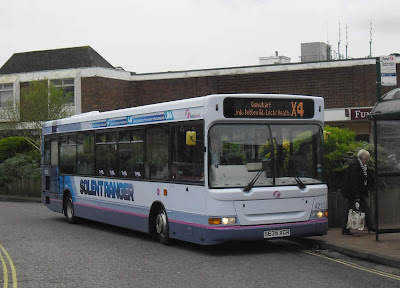 Hoeford Dart SLF 42135 (S635XCR) - which had only ever worn one coat of paint until two weeks ago - shows off the new Solent Ranger branding. Having seen it close up, if the registration was changed there would be nothing to indicate the bus is approaching it's 14th birthday.

Finally, as can be seen on the Dart, buses at Hoeford at least will be branded as "First Solent". Buses at Southampton are naturally "First Southampton". It will be interesting to see if Hilsea buses are branded for "First Portsmouth" - Hilsea hasn't had a repaint yet.

Keep it up First - things are going well.

* Note: Some people have been a little upset about a lack of investment for other routes. A couple of facts just for lunchtime reading:
- Southampton has a 100% low floor network apart from 2 buses which are being used as paint floats.
- Hoeford has a 100% low floor network apart from 4 Darts and the Olympians
- As well as the Eclipse arrivals, many other routes previously operated by step entry buses have also received buses at least 2 years younger - one of the 2009 Volvo B7RLEs was on previously step-entry route 33 this week.
- More investment will come for Portsmouth next year when the 2009 Volvo B7RLEs move on, on terms of the contract.
- Post-Olympics could bring further good news for FHD once the transfers have been sorted out.
- The BRT buses have to be upgraded again in 5-years, meaning Hoeford will receive new buses at least every 5 years.
Posted by bus80d at 11:00