On Saturday, I visited Poole with the intention of photographing some of the new Wilts & Dorset Volvo B7RLEs in service in the town. Many of the existing batch are out in use on other routes, and this post documents where some of them can now be found. 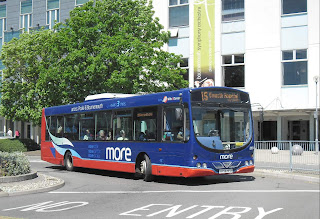 Numerically the first Volvo B7RLE in service with Wilts & Dorset, here is 2101 (HF54HFO) which I was lucky enough to ride in a loan spell on the island. 2101 wears the first More livery, and it will be interesting to see whether it ever gets the second More livery following the recent arrivals. BlueStar has been rumoured as a destination, but who knows. Not yet into Hampshire, 2101's new destination is Bournemouth Hospital on route 15 - usually operated by Darts in the week which were new in 1995... 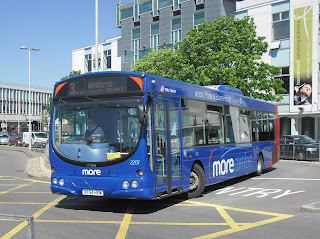 The 3 to Wimborne has been operated by the odd More Volvo for many a year. Once a premier W&D route as the "Wimborne Flyer", the 3 is to be cut from early June and replaced by longer journeys on route 4. One of my last photos of a bus on the 3 then, here is 2207 (HF54HFW) entering Poole bus station. 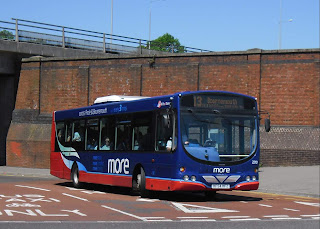 There seems to have been a slight element of "the right hand not knowing what the left is doing". While the 2004-5 batch of Volvo B7RLEs is being painted into the 2011 livery, a new brand new batch of 2012 buses is being delivered. This has meant there will be far too many buses in More livery at Poole. Subsequently, routes 8 and 9 have been upgraded to More status, adding Hamworthy and Turlin Moor to the More network. You may remember that until a few years ago, the 5 and 6 were More routes. It is interesting to see how the network changes. 2210 (HF54HFZ) is pictured at Bournemouth rail station, arriving on a 13 from Wimborne. 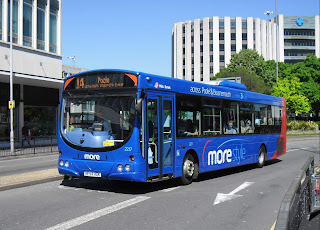 The 14 has also been seeing a temporary upgrade to the odd More bus - here is 2217 (HF54HGK) arriving into Poole on the 14 from West Howe. I prefer the original More livery - I don't think the red goes with this shade of blue particularly well. However, the ones that have been repainted are all presented very well.

More Volvos are being prepared for service at Poole and Swanage as we speak - it will interesting to see where Wilts & Dorset's original 38 Volvos will end up after they've all entered service.
Posted by bus80d at 11:00