My one and only picture of a Wilts & Dorset Bristol VR in service... 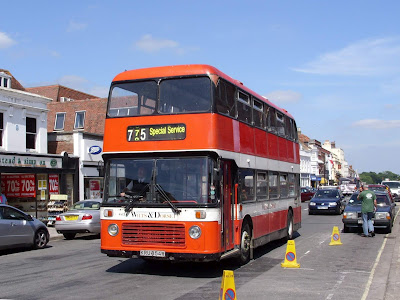 The first thing to note of this photo is that I'm surprised Wilts & Dorset still had any VRs in service in 2008! These were once the kings of the double deck fleet with Wilts & Dorset, with numerous examples in service from Poole amongst other areas. Sadly, they were largely culled before I reached the age where I could go out independently and photograph them. Therefore, I missed the widespread VR fleet in Bournemouth and Poole before "More" was introduced. I couldn't go out and get the VRs on the Brockenhurst college runs, and never found a W&D VR in Southampton on the 56.

I was extremely happy though, when on the 10th June 2008, 4454 headed off for a school service along Lymington high street. I remember it being a lovely bright, sunny day (anything like the weather we are having at the moment), and had already been quite successful. 4454 put the cherry on top of the cake. It is a shame for myself I couldn't capture any more, but if anyone would like to see more photos, I suggest they click here, and travel to Ant Poulton's W&D VR gallery.