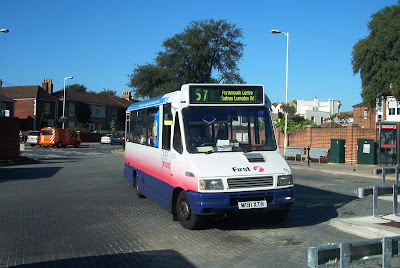 In May 2003, the Portsmouth Overground network was introduced. It covered five routes (including the Zip 41 corridor). With second-hand ex-London Darts still 9 months away, the  first operations on route 6 saw 9 Iveco TurboDailys receive Barbie 2, and 7 branded for route 6. These rarely strayed off route, but above I have an example of First Hampshire's 191 in Fareham well away from Tipner and Southsea.

191 is pictured on route 57 - a route operated by Hilsea's Ivecos until route changes in 2004, by which time Hilsea and Hoeford shared the route. The 57 was then cut to every hour, exclusively operated by Hoeford. This saw Hilsea's presence in Fareham restricted to simply a few early and late peaks.

Today, the Ivecos are long gone, and the 57 has been split between the X4, 4A and 16. The weekday service to Hayling Ferry is also exclusively operated by route 15.
Posted by bus80d at 11:00