The end of an era in North Devon

On Monday 12th March, news was released confirming the takeover of First's North Devon operation by Stagecoach South West. The depot will be taken over along with 10 routes, 30 buses and the employees. 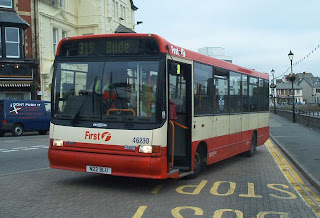 First took over the Red Bus operations along with First Western National many years ago. However, since 2006, the network has been gradually cut back. In 2006 went the tendered routes to Lynton, Lynmouth, Exeter and the Barnstaple town services, along with many other routes. Stagecoach Devon gradually increased their presence introducing "The Wave" route 21/21A, directly competing against First's most profitable route. In 2012, First have decided to call it a day in North Devon. Long gone are the days of buses in red and cream, like N22BLU in Bude, back in 2004. (Incidentally the Sunday 319 from Barnstaple to Bude was one of the first routes won by Stagecoach, and the first route that took them regularly into Cornwall for the first time). 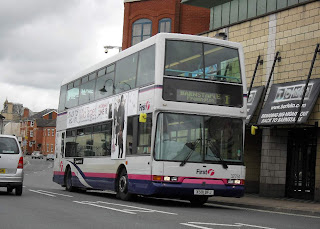 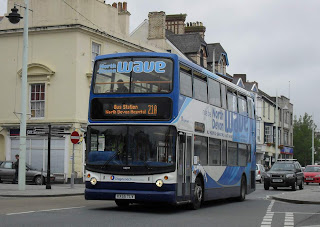 The wave appears to have tsunami-ed the connection. It will certainly be interesting to get confirmation on the X9, but also to see which buses are bought by Stagecoach. One would imagine these are already arranged in the agreement as part of the buying price - so we may see Trident X501BFJ, as pictured above, wearing Stagecoach livery and joining the other Tridents - like KX55TLV - very soon.
At the time of writing, there has been no "pass over" date. Interesting times ahead.
Posted by bus80d at 22:59