In 1996, Southampton Citybus received 6 Volvo Olympians from stock dealership, to upgrade services in the city from Leyland Atlanteans. In 2003, having passed into First ownership, all 6 moved to First Devon & Cornwall, to upgrade their X80 (Plymouth - Paignton and Torquay). I thought I'd lost the chance to photograph them again when they moved up to Manchester two years later. However, as a result of Olympic cascades, P295KPX has unexpectedly returned home to Hampshire. 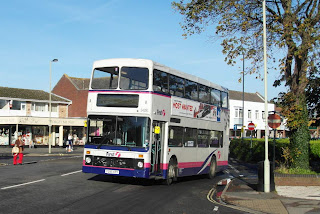 Ok, so not exactly *home* because 34295 has entered service at Hoeford rather than Southampton. Incidentally, it was never allocated to Empress Road, having left Portswood long before the new depot was even dreamed up. It is quite a smart bus externally - some panels could do with a quick brush up (such as the front black grills) but all in all she looks good.

I'm not sure why, but she seems to be spending an awful lot of time in Stubbington at the moment, on routes 33, 34 and 35. She has made it to Portsmouth too- and has been photographed on the circuit routes 17 and 18. These buses left just before I started photographing widely - I've only got photos of sisters P293KPX and P296KPX from 2003, and these are lost in the depths of fotopic at the moment... still not long until "J" comes around on the username download!

I'm not sure how long she will be around for, or whether more are coming. Sources within First are publicly stating they want around 7 or 8 low floor double deckers for the X4 (Portsmouth - Southampton), although I'm sure Volvo Olympians aren't what was envisaged.

The Hampshire Olympian allocation are as follows: