The Zero has unravelled...

The planned Portsmouth, Fareham and Gosport network is back, and there are a few headline routes. Firstly, the Zero has unravelled, and instead been replaced by a far more sensible arrangement on the 17 and 18 (yes, they are back), a route from Fareham into Havant is nearly restored (terminating at Farlington), and the evening connections are sorted (in theory). 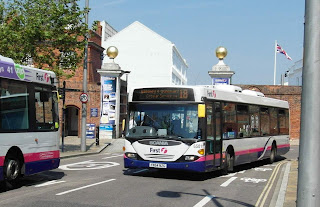 Return of the 17 and 18 - but not as we knew it
The Zero has been developed. It is now replaced by route 17 and route 18. Both operate half hourly along their respected routes. Route 17 connects Tipner, Copnor, Eastney and Southsea (Palmerston Road), which then turns into route 18, connecting Southsea (Palmerston Road), with Fratton, North End, Cosham and QA Hospital. The route is expected to be operated by Hilsea depot, and will see the connection between Southsea and QA Hospital restored (by First - the Stagecoach 20 did this a couple of weeks ago).

Route 3 - the 3A is dropped
Route 3/3A becomes the 3 throughout. The Hard - City Centre - North End - Cosham - QA Hospital - Paulsgrove at every 10 minutes, with three buses an hour then heading for Portsdown Inn, and three buses an hour heading for Fareham. The North Portchester link is cut by this route, and the Fareham-Portsmouth via Cosham buses are cut to three an hour. Combined with the X4, there are now 5 buses between Fareham and Portsmouth an hour. The 3 also now interworks with the 1 - which presumably will mean Volvo B10BLEs and Scania Omnicities provide consistency across the route. Again, presumably, the 2 will solely be in the hands of Hilsea Darts until improvements are made.

Route 22
Route 22 has changed rather a lot. The Farlington - Drayton - Cosham - QA Hospital portion remains the same, and remains half hourly, but here the route splits. The new 22A heads to Lower Wymering, hourly, while the 22 heads off to Portchester, Dore Avenue and Fareham, again hourly. Portchester's four buses to Cosham are maintained, with the axe of the hourly 3A extension.

There are other smaller changes, but these are the headline details. Changes begin on Sunday 17th March.
Posted by bus80d at 19:43