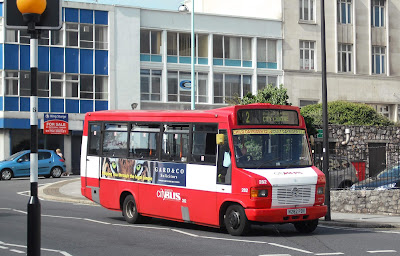 The 709D (and the local Iveco) was the minibus that I grew up on. I remember the extra legroom on the back row near the emergency door, where I regularly used to sit. The FHD examples also had (what I considered) a bright, happy pattern of many different colours on their seats - however, this is now very faded locally. I'm sure followers close to Plymouth will have their own Merc-Mini-memories too. For now, only the Solo (and increasingly the Wright Streetlite) remain for the small bus market, with reducing frequencies, Mini-Pointer Darts, short Enviro200s replacing the majority of existing stock. The golden age of the minibus appears to be well and truly over.
Posted by bus80d at 11:30