Arguably, First in Dorset's premier route is the X53, connecting Poole with Wareham, Weymouth, Bridport, Lyme Regis, Seaton and Exeter at a frequency of every 2 hours. The route has been developed in cooperation with Devon and Dorset County Councils over the last decade, but now First stand alone. They've just relaunched the route as the Jurassic Coaster, and this blog entry documents the changes to the route over the last 10 years. 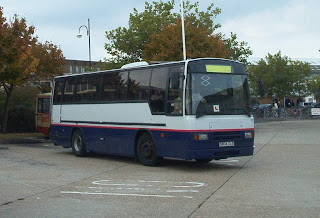 2002 was the last year of the former Volvo B10M mini-coaches that operated the route. Then at an irregular frequency and only Weymouth to Exeter, three of these coaches in Southern National green connected the two places. Following improvements to the X53, G804XLO was transferred up to Hoeford (one of the first transfers of the newly formed First Hampshire & Dorset), to act as a driver trainer. It is pictured on those duties, as it reverses into one of the bays at Gosport bus station. 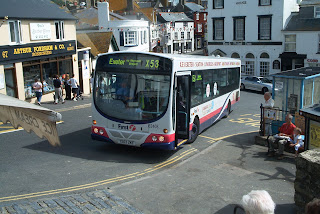 For the summer of 2003, five Scania L94UBs with Wright Solar bodywork operated the route, now extended to Wareham. The buses were diverted from a delivery to First in Essex, and here is one of the batch - 62408 (YS03ZKE). With the increased publicity of the route, standing loads were more common, which brought in the next new batch of buses... 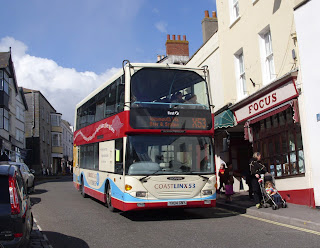 Six Scania Omnidekkas and one single decker joined the fleet between 2004 and 2005 for use on the X53, now extended to Poole. These carried a new dedicated livery for the X53, advertising it as the Jurassic CoastlinX53. Here is 36003 (YN04GNY), heading to Weymouth on a Sunday X53 through Lyme Regis. 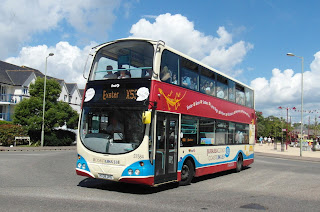 2008 saw the delivery of 8 brand new Volvo B9TL double deckers - thus far the only examples in the First Hants & Dorset fleet. The livery remained fairly similar. Over the next couple of years, relationships with councils would be strained, frequencies chopped and changed, Sunday services dropped and reintroduced, and it did not seem that the X53 would remain the same for long. Here is one of the batch - 37584 (HX08DHG), pictured heading through Seaton for Exeter in August 2013. 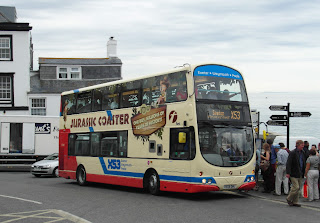 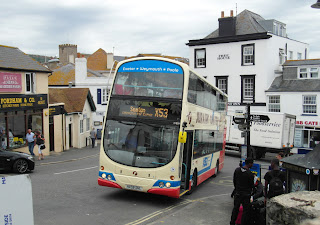 As First now tackles the X53 commercially, the requirement for buses no older than 4 years to be used on the X53 is redundant. Thus, the present 7 Volvo B9TLs are now being re-seated with high back leather seats, and rebranded as the Jurassic Coaster. The base of the livery is First's refreshed livery, using the colours of the existing livery. Thus far, only 37580 (HX08DHL) is the only one to be upgraded but the others will follow. It is pictured in a rather glum summers day in July 2013 in Lyme Regis while heading for Seaton and Exeter.

What next for the X53? Well, the two-hourly frequency is still stretched during summer months, especially when the holiday traffic causes long delays. Furthermore, the buses are still quiet during the winter, which saw the evening and Sunday services withdrawn last year - the Sunday service has recently been reintroduced for the summer but whether this will continue through the next winter is not clear. First seem to be investing long term in the route despite it now being an entirely commercial venture. It will certainly be interesting to see what the future will hold for the X53.
Posted by bus80d at 20:00